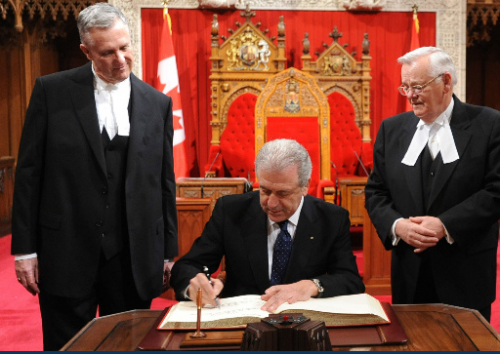 Foreign Minister Dimitris Avramopoulos, who is on an official visit to Canada, met with representatives of major Canadian companies and executives of large Greek Canadian businesses.

At a dinner co-hosted by the Greek Consulate General in Toronto and Canadian banking and investment agencies, Avramopoulos had the opportunity to set out Greece’s comparative advantages in major sectors – such as transport, tourism and shipping – including its highly trained human resources, the major changes taking place in the Greek economy, and the structural reforms that are being implemented and are shaping a friendly, secure and attractive investment environment in Greece.

Avramopoulos briefed the guests on the major decisions that have been taken on the European level, dispelling any doubts as to Greece’s position in the Eurozone and Europe, as well as on the rehabilitation of Greece’s credibility, thanks to the sacrifices of the Greek people and the prudent implementation of the reform programme, and the improvement in the country’s international image, which has created increased interest on the part of international enterprises in investing and becoming active in Greece.

Within the framework of the dinner, Avramopoulos met with Robert Gilmore, Chairman of the Board of El Dorado Gold, to whom he underscored the Greek government’s determination to guarantee the necessary conditions for the successful completion of the company’s planned investments, which will create 2,500 new jobs and increase Greek exports.

Avramopoulos also visited the Greek Community Center in Toronto, meeting with representatives of the Greek Canadian community. Addressing Canadian’s of Greek descent, the Foreign Minister ensured them of the determination of the Greek government and people to move ahead with the major reforms the country needs, returning Greece to its rightful place in the world. Referring to Greece’s geopolitical role, he talked to representatives of Greek organizations in Toronto about the major issues in Greek foreign policy and the steps being taken to reform the World Council of Hellenes Abroad (SAE).