Posted on: July 18th, 2013 by Dimitris Ioannou No Comments 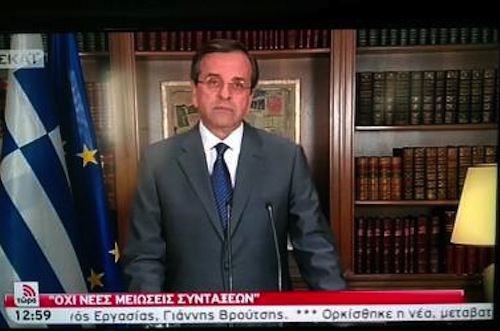 The Parliament in the early hours of Thursday passed the Finance Ministry’s omnibus bill, bringing changes to public sector employment, including transfers and layoffs, a new tax code as well as administrative reforms. The bill was passed with 153 votes in favour out of a total of 293 deputies present, AMNA reports.

Until even yesterday, the government was withdrawing provisions and submitting new ones in a bid to ensure its deputies back the legislation and to avoid alienating hundreds of mayors who have angrily opposed the proposed reforms, Kathimerini writes.

In an attempt to win the backing of all 155 lawmakers of the 2-party coalition, the government made several concessions withdrawing or altering certain provisions (e.g. one related to disciplinary action for mayors exceeding their budget limits), Capital.gr says.

The last-minute changes included the withdrawal of an amendment that would have given the 2,656 former employees of the defunct state broadcaster ERT a larger compensation package than other state company workers. Administrative Reform Minister Kyriakos Mitsotakis introduced several changes including the exemption from a mobility scheme for civil servants of municipal police officers employed in municipalities with fewer than 5,000 residents.

During his message, the Premier also said that the decision by the troika of lenders to adopt the suggestion for lowering of the VAT during Greece’s summer season, is the first announcement of a tax decrease in Greece.

Samaras said that certain measures included in the memorandum would not be introduced in 2014, “which means that there will be no new cuts in pensions and salaries of the armed forces; nor will there be an additional tax of 0,002% on business turnover,” achievements that showed “we have “If tax evasion continues as usual, VAT will climb back to 23%. But if it works out, I am sure more reductions in unbearable taxes will follow,” the PM said.

Samaras asserted that better days are coming. “We are not resting on our laurels. We will climb up the hill and get to the very end, which is not far,” he added.

However, Kathimerini understands that the troika only agreed to the VAT reduction in the food services sector after the government agreed to cut EUR 100 million from the Defense Ministry’s arms procurement programme. Athens and the troika disagreed about what kind of hole the change in VAT would leave in public revenues. Greece’s lenders thought it would be closer to EUR 130 million but eventually gave ground.