Posted on: September 6th, 2013 by Dimitris Ioannou No Comments 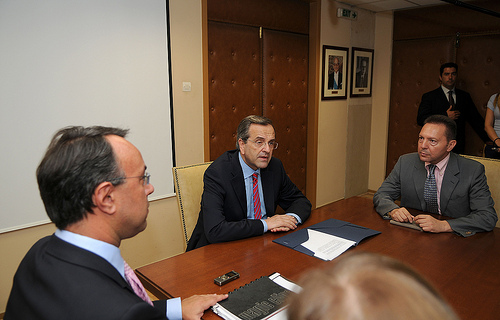 According to Kathimerini, an email sent to the Finance Ministry by European Commission representative Matthias Mors, and leaked in the Greek media yesterday, referred to the troika’s doubts about the credibility of the government’s plan for overhauling the three firms while they are still in operation. Instead, the troika proposed liquidation for EAS and ELVO and, in Larco’s case, the possible splitting of the firm into two before its attempted sell-off. “The proposed restructuring plans are in our view not viable or realistic,” the e-mail said. “In our view, the option of closure/liquidation must be considered for all three companies,” it added.

Earlier in the day, Finance Minister Yannis Stournaras said the liquidation of the companies over a period of five years would “be more valuable to the state” than bankruptcy. He said the government would try to avert a scenario involving staff being laid off without compensation, claiming that “at least certain parts of the businesses are valuable.”

Enet.gr presented the text of an email sent by the troika to the government rejecting the latter’s proposals to restructure state-owned Hellenic Defence Systems (EAS), Hellenic Vehicles Industry (Elvo) and mining company Larco.

The email was sent my Matthias Mors, the European Commission’s representative in the troika, to the ministries of finance and defence on Monday evening. The email has as follows:

“Thank you very much for forwarding the restructuring plans for the three companies. Please find a detailed reaction from our side with the conclusion that the proposed restructuring plans are in our view not viable or realistic and do not guarantee a sustainable solution from the economic efficiency, budgetary and state aid points of view. In our view, the option of closure/liquidation must be considered for all three companies (as reflected in the language of the MEFP/MoU [Memorandum of Economic and Financial Policies/Memorandum of Understanding] and the public announcement in July). In this context, any liquidation should not be conditional on indemnities going beyond legal requirements or on a redeployment of the work force.

LARCO: Our main concern for LARCO is that in your proposal the tendering processes for the two asset clusters are not fully independent from each other (for the privatisation of the smelter and the mines, respectively), thus involving business continuity without addressing the fundamental state aid concerns (the transaction is structured in such a way that there is a high probability that the same investor will acquire both tendered assets and will thus be liable to pay back the State aid). Moreover, the potential investors are required to maintain employment in an over-staffed organisation that has been loss-making since 2008. This is an objective which is not commensurate with long-term viability of the company and is creating additional financial risks.

The alternatives for the government should be either to sell the asset and expect from the buyer to pay the state aid back (as mentioned in the Almunia-Rehn letter) or to sell separately the Agios Ioanis/Larymna concession and the remaining Larco assets in an unbundled fashion, without giving the investor any specific option to acquire all assets or liquidate them otherwise (if they do not find buyers). In this context, the assessment of the alternatives would be facilitated if you could provide us with pre- and post-restructuring financial accounts.

HDS [Hellenic Defence Systems, EAS]: You are envisaging EUR 144 million of State funds to the military activities that would result from the split between civil and military activities of HDS, additional to the already inherited liabilities from the past. The proposal is basically calling for a rather generous early retirement and exit scheme, which would have implications in terms of fiscal space and the programme. Given the fiscal space constraints and the dependence of the company on domestic orders, we believe that this is not a viable solution and the company should be liquidated. If a case could be made from a national defence objective perspective, this has to involve a substantially downsized/restructured company which is domestically oriented. It has to be seen whether at such lower scale (given lower revenues but possibly high fixed costs) it makes sense from an economic point of view to keep the company on the market or whether one should just to proceed with outright liquidation.

The assumption in your analysis that the shareholder’s losses will stop upon the completion of the backlog contracts and that the company may win further contracts allowing thus the completion of the development plan is not realistic and does not guarantee any security related to the viability and future of the company. In conclusion, we consider that an outright bankruptcy of the company is the most desirable and realistic solution.

We look forward to receiving a new improved version of the restructuring/liquidation plans for the three companies, which take into account our comments/suggestions.