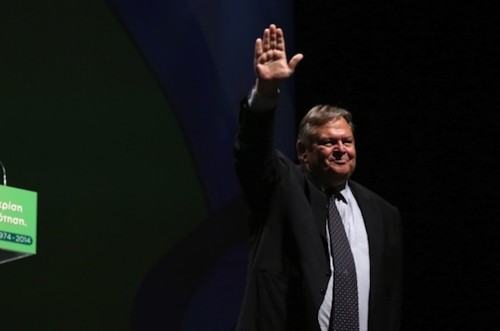 “We have a clear point of departure. We all unequivocally condemn the use of chemical weapons as an abhorrent crime, and we all want to move within the framework of international law.

We have a clear goal: To safeguard the political process, the prospect for Geneva II. But we have two major difficulties. The first is the inability of the Security Council to take decisions. The second, and more substantial, is the complex and contradictory situation that exists in Syria following the use of chemical weapons. It isn’t easy to shape a comprehensive strategy of the international community for a viable political solution in Syria.

But that is what we have to do if we want to safeguard the Euroatlantic partnership and the existence of the European Union as a political entity.

This is our real difficulty and our real obligation: to discuss and decide upon not just the reaction to the specific crime, but also the formulation of a comprehensive strategy on Syria that will lead to a real solution.”

The informal Meeting of EU Foreign Ministers continued in Vilnius yesterday – with the participation of U.S. Secretary of State John Kerry – with the discussion focusing on the Middle East peace process and he situation in Syria.

In his remarks, Evangelos Venizelos supported the need to formulate a single European position on Syria.

He also emphasized the need to safeguard as best as possible not only the Geneva II process, but also the substantial content of a comprehensive and viable political solution that is inclusive and will extricate Syria from its tragic civil war without strengthening extremist and fundamentalist voices.

Referring to Kerry’s mediation effort in the Middle East, which is based on detailed attention to all parameters, Venizelos stressed that the international community needs to carry out a similar process for Syria with the aim of the stabilization not just of Syria, but also of the wider region.