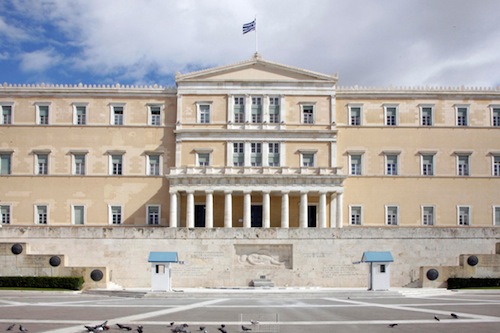 Coalition government and opposition are preparing to engage in an unprecedented confrontation today in Parliament in the debate and vote on the creation of a parliamentary committee to probe potential criminal offenses in the handling of the Lagarde list.

According to protothema.gr, yesterday evening, and after many consultations on Greek Constitution and parliamentary Standing Orders, the majority (ND, PASOK, DIMAR) decided that the process be done in one sitting with 3 separate votes -one for each proposal- and a total of 7 polls.

The coalition has proposed that only former Finance Minister Giorgos Papaconstantinou be probed in connection with the handling of the Lagarde list following the revelation by prosecutors last month that the names of three of his relatives were removed from the list, Kathimerini writes.

SYRIZA wants Papaconstantinou’s successor Evangelos Venizelos, who leads PASOK, to be investigated along with the former. And the two smaller opposition parties, Independent Greeks and the Golden Dawn want former premiers George Papandreou and Lucas Papademos to be probed too. It is expected that, for each of the votes, MPs will be given ballot papers with the names of all four politicians and the charges they would face.

The participation of MPs in all 3 votes is not mandatory, but New Democracy says “we will participate to the end. There is no question of withdrawal.”

The political frenzy surrounding the Lagarde list affair has resulted in limiting the parliamentary discussion to the process, to increasing or decreasing the number of ballot boxes and votes and losing the actual substance which is placing the blame where blame is due, political analysts have suggested.

SYRIZA leader Alexis Tsipras said that “it is inconceivable that this was decided in the meeting of the three political leaders. The smooth functioning of parliament is being undermined and essentially we have a procedure that removes the secrecy of the vote. This has never happened before in the Greek parliament and reveals panic. Venizelos is self-incriminating himself by asking Samaras for protection. But at the same time he becomes his hostage.” Venizelos, on the other hand insists that “the perpetrator of this conspiracy against PASOK” is the main opposition party.

Finally, late yesterday tovima.gr wrote that SYRIZA is examining the possibility of withdrawing from the voting process if the majority insisted on its proposal for setting up seven polls.

This tactic, SYRIZA people maintain, waves the secrecy of the vote, in a way ‘protecting Mr. Venizelos, who main opposition would like to see investigated about his responsibility regarding the Lagarde list affair.