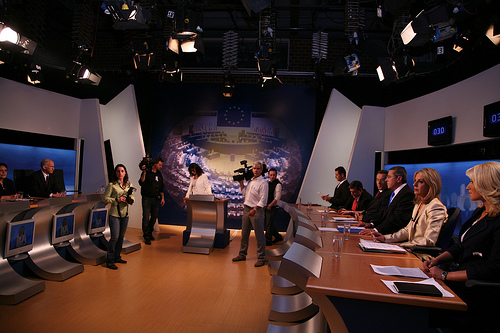 With only a few weeks away until the May 6 elections, Greece’s political parties have shifted their attention to televised debates, which could prove crucial in what is expected to be an unpredictable close-run contest, according to Protothema.

Six parties apart from apart from PASOK, New Democracy, the Communist Party (KKE), Popular Orthodox Rally (LAOS), Coalition of the Radical Left (SYRIZA) and Ecologist Greens which were not represented in the last parliament and are contesting the upcoming elections will be given some airtime on ERT, according to a joint ministerial decision signed on Monday by Interior Minister Tassos Giannitsis and Minister of State Pantelis Kapsis.

This decision is in response to an an appeal to the council of state by Drasi Party , which objected a cross-party committee decision to provide airtime just to the five parties who won seats at the 2009 elections and the Ecologist Greens, who won a seat in the European Parliament in the same year.

Any party that has received at least 0.25 the previous national elections or European Parliament elections will be guaranteed some airtime.

State broadcaster ERT is obliged to carry a 45-minute interview with the leader of each party and will have to cover live one of the group’s public rallies, ANA reports. ERT and private channels will also allocate each party two five-minute spots during their evening broadcasts and a total of 25 minutes for campaign ads.

However, the issue of a televised debate between party leaders remains undecided. PASOK has challenged ND leader Antonis Samaras to a two-way debate with Socialist chief Evangelos Venizelos. The conservatives rejected this idea yesterday, arguing it would simply lead to “monologues” by the two politicians. ND called for a cross-party committee to agree on a format involving more leaders. “They are rejecting dialogue because they are afraid,” said PASOK spokeswoman Fofi Gennimata, according to Kathimerini.