Posted on: April 22nd, 2013 by Dimitris Ioannou No Comments 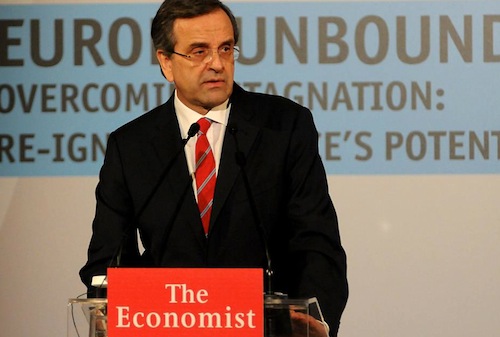 Media have continued pushing Maximos Mansion for a cabinet reshuffle, considering changes to escape an impasse in the implementation of reforms policy.

A recent piece of legislation that envisaged new Ministers’ Deputies posts in six ministers has triggered new discussions on the matter. The government has announced that the new positions will be in the Ministries of Administrative Reform, Justice, Public Order, Tourism, Shipping, Macedonia-Thrace and Education-Culture. Officially it is argued that posts were created to match new organisational charts of ministries.

At the same time, opinion polls continue to suggest a relative tie between ND and SYRIZA.

According to media writings, Prime Minister Antonis Samaras understands that time is running out and he is now faced with dilemmas that should give urgent answers.

It is clear that the PM was not entirely pleased by all of his Ministries, so this way he can provide a solution, as well as appease PASOK’s request for greater participation in the government, tovima.gr writes.

By creating these new positions the Prime Minister will be able to introduce a number of his trusted partners, without having to replace any of the current ministers. That way he can reinvigorate the government and take advantage of the fresh perspective of new members, without any delays.

This is especially important for Ministries on tight timetables, such as the Ministry of Labor. The Minister can now focus on the public sector dismissals program, while his soon-to-be-appointed deputy will assist in other matters.

Based on the introduction of the new spots, many estimate that a wider cabinet reshuffle might happen after Easter. After all, both the Prime Minister and his government partners Evangelos Venizelos and Fotis Kouvelis have agreed that changes are necessary.