Greek PM: ‘Democracy will not be terrorised’ 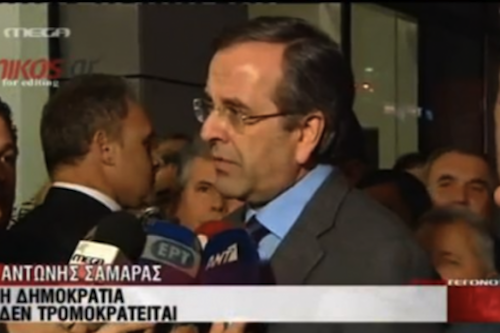 “You can shoot a person, like the building that they shot,” Samaras told reporters yesterday evening outside ND’s offices. “You cannot shoot democracy though. Let this be heard by those who need to hear it: Democracy will not be terrorised.”

According to the police, shots were fired early Monday at the headquarters of New Democracy party, with one of the bullets penetrating the office of Prime Minister Antonis Samaras. Two men fired two guns at the building at around 2:30 am (0030 GMT), police said. No one was injured.

A window was pierced on the side of the building and a bullet was found in Samaras’ office, according to government spokesman Simos Kedikoglou.

“A symbolic bullet for the prime minister, this is unheard of,” Kedikoglou told state television NET. “We will not let them terrorise us,” he said. “The government will do what is required to protect democracy.”

According to protothema.gr, security cameras show two hooded men armed with Kalashnikovs getting off a car and after walking 50 meters, stopping and from a 70-meter distance shooting at the neon sign of the ND offices.

Meanwhile, the burnt car found in Paleo Faliro is being thoroughly examined. While the inside of the vehicle is completely destroyed by the fire, police are trying to locate fingerprints or DNA from the offenders.