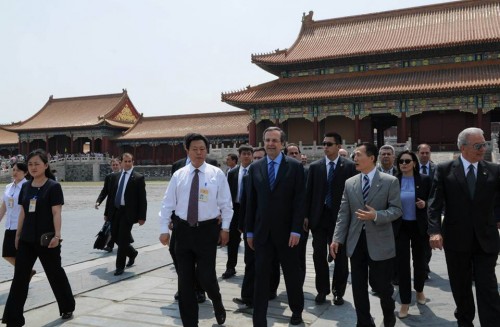 On his first day of his official visit to China, thePrime Minister Antonis Samaras announced a number of transnational deals in telecommunications and shipping with Chinese firms.

According to tovima.gr, Samaras is going to negotiate deals with representatives of top Chinese firms such as Cosco, China Development

Bank, the national railway and telecommunications companies. These deals involve the exchange of technical know-how in networking and infrastructures.

Speaking at the Beijing Academy of Arts, Samaras stated that “Greece is China’s natural gate to Europe” and that “I would not be here if Greece hadn’t changed its course”. The PM explained to Chinese students that the austerity measures were necessary since the debt had increased in excess and that the Greece’s main problem is unemployment. He expressed his hopes in tourism and the estimated 17 million tourists to help rejuvenate the economy.

In his speech Samaras emphasized the importance of developing long-term strategic ties between Greece and China. The two countries have a shared notion of history, noted Samaras, adding that he would like China and Greece to have a common future. He added that there was ground for collaboration in the fields of infrastructure and tourism, among others, Kathimerini informs.

While speaking on state Chinese television network, the Premier spoke of the two countries having marked history “in eons and millennia, when others count their history in decades” and highlighted the global importance of historical Greek and Chinese figures such as Confucius and Plato.

Following their talks, a number of agreements and protocols were signed by the Greek side and the Chinese government.

“We are global shipping powers and we can cooperate in many areas. Since 2010 there has been heightened cooperation, while Chinese companies desire to become active in the infrastructure sectors. We will take action to boost commercial transactions, with the target of increasing the volume of transactions to EUR 8 billion in 2015,” the Chinese premier said during a dinner for the Greek mission.

Referring to geopolitical issues, Li noted that China is Greece’s ally in the Cyprus issue and asked for Athens’ help in improving China’s relations with the European Union, especially in light of Greece’s upcoming stint in the EU presidency in the first half of 2014.

He also asked Athens to reduce bureaucracy and simplify the process for issuing visas. Responding, Samaras noted that the new investment law made provision for fast-track procedures that will make Chinese investment easier, adding that the Greek government “is here to look at everything, step by step, and facilitate our cooperation.”

Specifically, they discussed expanding the activity of the Chinese container company Cosco at the main port of Greece, Piraeus, and the possibility of Chinese investment in Greek railroads and regional airports and ports.