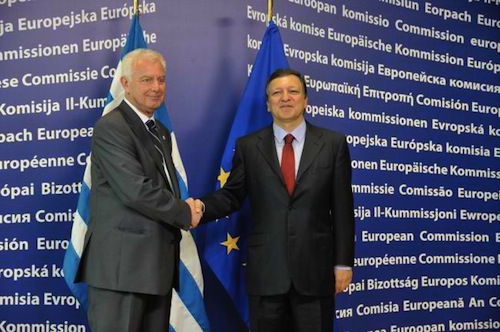 I reiterated the Commission’s strong desire that Greece should remain a member of the euro area and that we will continue to do everything in our power for this to happen.

The euro area has shown unprecedented solidarity to Greece and its people. It has made a commitment to maintain financial support for Greece as long as is necessary, assuming Greece maintains its commitment to implement the structural reforms that are essential for a return to growth. Without this solidarity, Greece will not be able to return to growth and prosperity. I therefore underlined the importance of Greece maintaining the commitments it has made.”

Meanwhile, at the Summit of the European People’s Party (EPP), which took place today ahead of the informal European Council, EPP leaders adopted a declaration stressing their commitment to overcome the current economic difficulties and to restore confidence in the European economy. EPP leaders stressed in an announcement: “Since 2008, the EPP and its leaders have dedicated all their efforts to fight the current economic and financial crisis. The declarations that we adopted in Helsinki and in Marseille show our commitment to ensure fiscal policy sustainability and to, at the same time, remove all the obstacles that impede growth in Europe,” EPP President Wilfried Martens declared.

“Actions must be taken in order to combat the excessive levels of public debt. That’s why the EPP is supporting the swift ratification of the Fiscal Pact so that we can create a stable and predictable environment that will stimulate economic growth,” Martens added.

“In addition, a number of concrete steps such as providing a well-functioning, integrated and transparent financial market, initiating labour market reforms, creating the digital single market, cutting red-tape, can facilitate the return of Europe on the path of sustainable development. In an increasingly challenging globalized world, our focus should be on improving productivity and competitiveness,” the EPP President underlined.

“Therefore, the EPP heads of state and government and party leaders are committed to reaching an agreement on further steps towards completing the EU economic strategy until the meeting of the European Council on 28th-29th June 2012, and call on other Members of the European Council to adopt a similarly constructive attitude,” Wilfried Martens said.

Finally, the declaration from the Summit also underscores EPP’s solidarity to Greece: “During the meeting, all of our leaders stressed the importance of Greece remaining in the Eurozone. That’s why we offered our full support to the efforts of Nea Demokratia and its President, Antonis Samaras, and we are prepared to consider possible ways to strengthen investment, growth and employment complementing the necessary reform measures and respecting the commitments of the pursued programme,” the EPP President concluded.