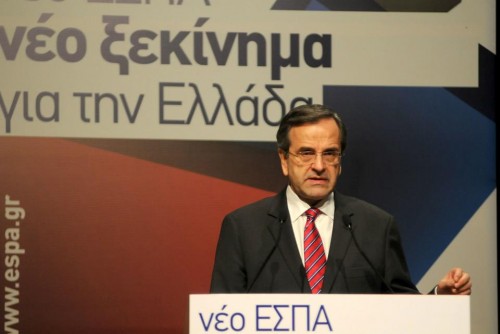 Addressing yesterday 1st National Development Conference for the programming period 2014-2020, jointly organized by the Development Ministry and the European Commission, budgeted at EUR 36 billion, Prime Minister Antonis Samaras argued that the first signs of recovery of the Greek economy are already visible.

According to AMNA, Samaras said that the year 2013 is a turning point that will lead to growth, given that the results of the measures taken by the government will begin to be clearly visible in the next quarter and become tangible on the market by the end of the year.

The Premier made a specific reference to the fact that in February a positive balance between hirings and layoffs was posted for the first time in many years, which he said was a significant sign of recovery.

EU Commissioner said: “The issue is not just how to give money to address an urgent problem, but to emphasize on innovation and entrepreneurship”.

Hahn said investments must be channeled to modern technologies of waste management and investments, in energy and tourism, and on culture. “The sun and sea are not enough,” he noted, adding that a framework for managing Community funds for the 2014-2020 period would be completed by June. “Money should be given to projects that will change Greece.”

Hatzidakis also said the government was drafting a programme to modernize public services and a wider development plan for “the day after” the memorandum in Greece. He noted that each region would have its own development programme.

Meanwhile, after his first meeting with the troika representatives, Finance Minister Yannis Stournaras yesterday told reporters that “nothing will be finalised until everything is finalised… there is still work to do.”

A finance ministry source told journalists that the full range of economic issues – from public finances to banks and structural reforms – was discussed during the meeting a and that arrangements were made for the meetings and negotiations that will take place during the troika’s visit.

According to media reports, the government hopes that the talks will be wrapped up by April 15, so that disbursement of the next tranche of bailout loans can be approved by the Eurogroup at the end of the month.