Posted on: June 5th, 2012 by Dr. Demetris Kamaras No Comments

Greek politics and out of the box thinking – opinion 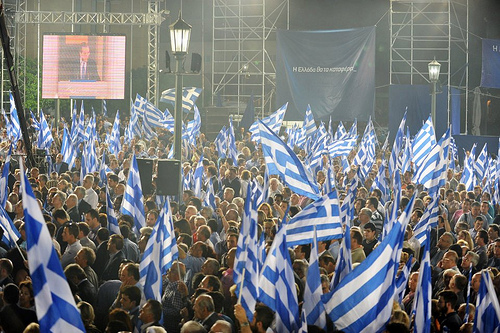 Political scientists and pollsters gathered last week at Panteion University to discuss critical elements of May 6 elections, in an attempt to pin down some arguments that could throw light on the new political scene in the country.

A key concept that came out quickly from the start was uncertainty, as regards the electorate’s behaviour; after all, it is a fact that on May 6, 40% of voters decided over the ballot box. This is an astonishing figure, but at the same time, a notion most Greeks agree on, having stories to tell about people’s wrath that made many to draw randomly out of a stockpile of 30 party ballots.

Discussion at Panteion University also confirmed something that was evident amongst analysts a long time ago: that the degradation of Greece’s political system began in 2007, after New Democracy won the snap elections that took place soon after the huge forest fires in Peloponnese. Metron Analysis’ Stratos Phanaras pinpointed four parametres that came to life back then: a) clientelistic activity boosted by ND administration, b) political trust collapsing due to an already lost 4-government season-period of failed promises (2004-2007), c) both ND and PASOK leaderships appeared denying Greek fiscal reality and d) the escape of Karamanlis from the premiership two years later.

Truly, ND’s steep fall in 2009 -after a badly conceived pre-election campaign that included a doomsday approach and an extensive outdoor advertisement activity that enhanced the negative result- proved the mortality of the old parties; and things got worse. In May 6, the ballot recorded low double digits, with 18.8% to stand worse than expected, partly due to last minute political strategy failures.

In the voter’s mind, the disappointment of the Karamanlis years was temporarily nurtured by George Papandreou’s “there is money” concept, which, despite the dominant talk, it began as an attempt to point towards hidden Greek GDP and possible savings from tackling corruption and ended up becoming a vast political myth that enriched the rhetoric of his opponents.

In the last two years, “people lost the ability to plan ahead; to place themselves in the future”, a pollster said. At the same time, the political system could not support clientelism people have been used to, for so many years. In 2010, the initiation of the Memorandum policy found no social support, since its implementation so far relied exclusively on fear tactics and tax hikes, rather than a process of creative and daring approach of the country’s real problems.

Political scientists claim that the new era in Greece needs to be thoroughly examined, some say away from any communication influence. Well, for those who believe in fragmented approaches, there is news for them coming from the real world. Greece’s new situation should be seen through a multi-disciplinary prism that will also allow for out of the box thinking.

For instance, social networks, “citizen journalism”, rumour-style bloggish publications and peer recommendations through Facebook and Twitter constitute more important sources for young people in their understanding of reality than any politician with a suit, who will stand on a podium to address an applauding partisan audience. This is a reality old style politicians in Greece still seem to fail to comprehend.