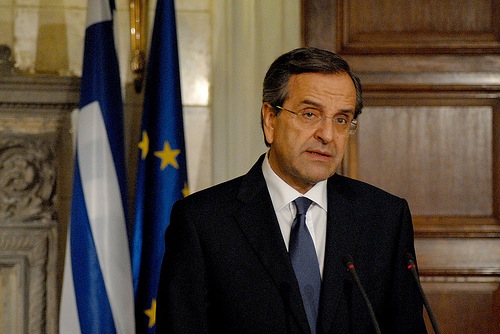 Prime minister Antonis Samaras is on an official trip to China to strengthen economic and political cooperation and attract investments.

He arrived in Beijing where today he will speak at the Chinese Academy of Social Sciences. In the afternoon he will meet with the prime minister of the People’s Republic of China Li Keqiang.

According to AMNA, tomorrow, May 17, Samaras will talk at the Hellenic-Chinese Business Forum and the same day he will meet with the chairman of the National People’s Congress of China Zhang Dejiang and president of the People’s Republic of China Xi Jinping.

Saturday, May 18, the Greek PM will travel to Changzhou city, where he will meet the governor of the region and will speak at the World Cultural Forum, and will then go to Shanghai to meet with the mayor of the city and will speak at a business forum.

Samaras will meet with government officials and chief Chinese business groups and will be accompanied by a group of Greek businessmen who want to exploit the political climate to close business deals.

From the government side, he will be accompanied by the ministers of Foreign Affairs Dimitris Avramopoulos, of Development Kostis Hadjidakis, of Shipping Kostis Mousouroulis, Tourism Olga Kefalogiannis, deputy Development minister Notis Mitarakis and his advisors Chrisanthos Lazaridis and Stavros Papastavrou.

On Sunday, May 19, he will make a working visit to Baku, Azerbaijan, concerning the prospect of energy cooperation between the two countries.

The list of businessmen who will accompany PM Antonis Samaras in China contains 73 names. During the stay of the mission there will be two business forums, one in Shanghai and one in Beijing.