Posted on: April 18th, 2013 by Dimitris Ioannou No Comments 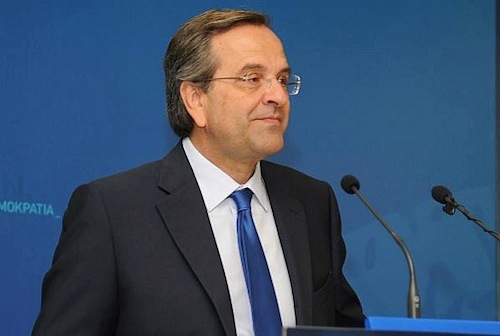 In light of the recent negotiations with the troika representatives, Prime Minister Antonis Samaras wants to personally supervise his ministers, in order to achieve “maximum efficiency” by June, a critical period in the troika evaluations, tovima.gr writes.

Samaras aims at being personally involved to avoid any deviations from the government plan and goals. Maximos Mansion sources claim that the PM is constantly stressing the urgency and is considering plans to increase the cooperation of

 ministers. The PM will continue his efforts to project all the positive aspects of the troika negotiations, the paper writes.

According to Kathimerini, the government is shifting its focus to the business of implementing the reforms, which include the politically sensitive matter of thousands of layoffs in the civil service.

Ministry technocrats met in Parliament yesterday to discuss what action needs to be taken if Greece is to secure the release of a EUR 2.8-billion installment that had been due in March and another EUR 6 billion for May. It remained unclear, however, whether the government would submit the measures to Parliament for approval or impose them using an emergency decree to avoid another cliffhanger vote that could shake the cohesion of the fragile coalition.

Once again, the government has little time, with the next Euro Working Group on April 29 and the next scheduled Eurogroup summit on May 13.