Posted on: October 28th, 2012 by Romana Turina No Comments 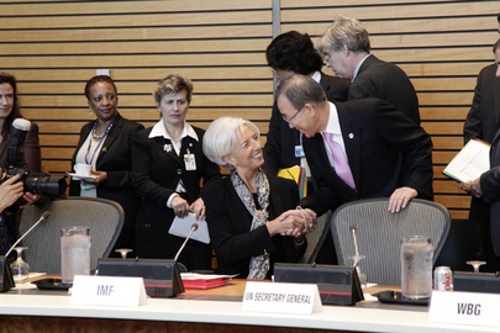 There are 2,000 Greeks said to have accounts in a Swiss bank, according to the Greek magazine, Hot Doc. The list was published on Saturday, and the speaker of the Greek Parliament, several employees of the Finance Ministry and a number of business leaders are on it.

The list was passed on by Christine Lagarde, then the French finance minister and now the head of the International Monetary Fund, to her Greek counterpart in 2010 to help Greece crack down on rampant tax evasion. Allegations say it was well known by some current and former government officials. The 2,059 people on the list are said to have had accounts in a Geneva branch of HSBC.

As questions about the handling of the original list reached a frenzy in Athens, where two former finance ministers were pressed to explain why the government appeared to have taken no action on the list, the news has touched a nerve among average Greeks as the Parliament is expected to vote on a new 13.5 billion euro austerity package.

If to have an account at HSBC is not illegal, or proof of evading Greek taxes, people point out that Greek officials should check whether the subjects on the list had moved money into the accounts to escape paying taxes.

According to Hot Doc, the list includes people in the government and businesspeople, but also actors, doctors, lawyers and architects; as well as several women identified as housewives.

A few hours after the magazine was published, Athens prosecutors issued a warrant for the arrest of Kostas Vaxevanis, the owner and editor of Hot Doc, on misdemeanor charges related to violating the privacy of those on the list.

Mr. Vaxevanis, a famous investigative journalist, said in an interview that was uploaded on the Internet, that  he was being wrongly targeted: “Instead of arresting the tax evaders and the ministers who had the list in their hands, they are trying to arrest the truth and free journalism.”

There was no official comment from Prime Minister Antonis Samaras, or from anybody from the fragile three-way coalition government, even if Evangelos Venizelos is one of two Socialist former finance ministers accused of not having acted on the information.

On Friday, the office of former Prime Minister George Papandreou denied claims that he had been aware of the list, after a member of the opposition Syriza party stated that Mr. Papandreou had helped set up a meeting with the head of the Geneva HSBC branch in Geneva when he was in office.

Giorgos Voulgarakis, the speaker of the Parliament from Mr. Samaras’s center-right New Democracy party who is apparently on the list, denied having any overseas bank accounts and accused Hot Doc of mudslinging.  According to Hot Doc, the parliamentary speaker opened an account at HSBC in 2003 that was jointly managed by him, his wife and an offshore company based in Liberia.

Mr. Stournaras, the finance minister, sent a letter to his French counterpart several days ago asking for the original list. His assistant said that the Greek Finance Ministry wants to be certain that it has the original list of names before investigating whether any tax evasion occurred. The list dates to 2007.

It is certain this news will take the attention of the Greek population and politicians for the next weeks. It could not come in a worse time, as within the week European finance ministers are scheduled to discuss the possibility to release billions of Euros in fresh financial aid, but at the price of new austerity measures demanded by Greece’s lenders.