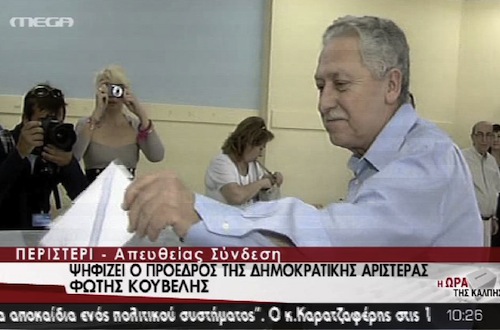 International markets, foreign capitals and the European public are closely watching today’s run-off election in Greece. Local media place the future of the country and the fate of the euro upon Greek voters’ hands. Some say political and economic integration of Europe depend on the outcome.

New pre-election period that followed May 6 poll intensified the dilemmas and increased the percentages of the two major parties. According to Kathimerini, opinion polls indicate that ND and SYRIZA are running neck and neck for first place, which would grant the winning party extra 50 seats in Parliament. This would be vital for forming a coalition government. Neither party is likely to win an outright majority. PASOK is expected to come in third place, with anti-bailout Independent Greeks, Democratic Left, the Communist Party and Golden Dawn also passing the 3% Parliament threshold.

According to ProtoThema.gr, unpublished polls run by political parties in recent days reflect a thriller situation in the electoral body, as the differences between ND and SYRIZA are within the limit of statistical error, while undecided voters seem exceeding 15%. This fluidity creates a climate of uncertainty before the final outcome of the elections, as most survey companies record a meager lead for ND, while others believe that the social dynamic, if expressed at the ballot box, will give the victory to SYRIZA.

For the international community, the challenge of today’s election is Greece to manage to form a government in the coming days that formulate conditions justifying some hope for the country.

According to Bloomberg, European Union and International Monetary Fund have insisted that the conditions of the EUR 130 billion bailout accord agreed in March must be accepted fully by a new government or funds will be cut off, driving Greece into bankruptcy.