Hama explosion kills 70; many of them children 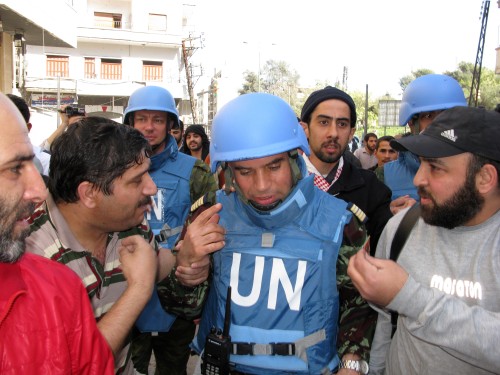 State-run SANA TV reported  the explosion by showing pictures of injured children in hospital and says 16 people died in the blast in a house used to make bombs by “armed terrorist groups”.

One report by Syrian activists said 13 children and 15 women were among the dead.

The Syrian Observatory for Human Rights (SOHR), a UK-based rights group, not knowing the casue of the explosion, asked UN monitors in the area to investigate.

Meanwhile, a video has emerged which purportedly shows a man being buried alive by security forces,  for sending material to TV stations.

The opposition Syrian National Council has called for an emergency UN Security Council meeting “so that it can issue a resolution to protect civilians”.

Persistent violence has been reported across Syria since a ceasefire was introduced earlier this month including areas where UN observers are present.

France now says the Security Council should consider the use of  military force in Syria if Mr Annan’s peace plan fails to halt the violence.

The plan calls on Damascus to withdraw troops and heavy weapons from cities.