HRW urges Egypt not to force Palestinians back to Syria 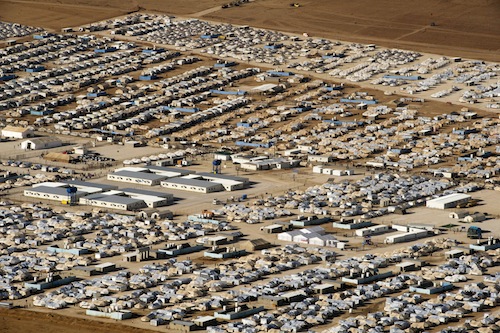 Two Palestinians being held at the Cairo airport, apparently refused entry to Egypt, are at risk of deportation to Syria, Human Rights Watch said. “The man and his son would face indiscriminate violence and possible persecution if returned to Syria. The Egyptian authorities should not to return anyone to Syria at this time,” HRW stressed.

It appears that some asylum seekers arriving from Syria in Egypt are at risk of refoulement, forced return to Syria, Human Rights Watch said. Egyptian airport officials deported two Syrian men back to Syria on January 13, 2013, in violation of Egypt’s non-refoulement obligations. In mid-December, immigration officials halted an attempted deportation of 13 Syrians at the last minute.

“Egypt may have a right to detain people temporarily or investigate them on grounds of false documentation but it may not under any circumstance return them to Syria,” said Bill Frelick, Refugee Program director at Human Rights Watch. “Egypt is obligated under international law not to return anyone, regardless of status, to a place where they would be persecuted.”

The authorities should allow representatives of the United Nations High Commissioner for Refugees (UNHCR) to visit the two men, Human Rights Watch said. The Palestinians told credible sources that they had entered Egypt from Syria using their official Palestinian refugee travel documents with the rest of their family.

UNHCR’s latest guidance on Syrian refugees calls on all countries to “maintain a moratorium on all returns to Syria for the time being, pending an assessment of when the changed situation in the country would permit return in safety and dignity.”

Egypt is also a state party to the International Covenant on Civil and Political Rights (ICCPR), which, under article 13, prohibits arbitrary expulsion and entitles foreigners to an individual decision on their removal/expulsion. The UN Human Rights Committee has interpreted article 7 of the ICCPR to forbid refoulement – or forced return – of people to places where they would be at risk of torture or cruel, inhuman, or degrading treatment or punishment. Egypt is bound to apply the ICCPR to anyone in its territory.

On January 13, Cairo airport officials deported two other Syrian men, ages 20 and 22, to Damascus on January 13. The two had landed in Egypt on December 12 from Syria with valid passports. When they attempted to travel to France13 days later, airport immigration officials detained them on the grounds that their visas to France were forged, credible community sources told Human Rights Watch.

In the week of December 13, immigration officials transferred 13 Syrians who had been in detention in Qanater prison after their arrest in Salloum to Cairo airport for deportation. Airport security officials released 6 of them on January 16 after their lawyer intervened, and the other 7 remained in the airport for another day. They were released after UNHCR intervened. It is unclear what prompted this attempted deportation, and what stopped it.

Egypt has provided protection for more than 13,000 refugees from Syria, a positive development, Human Rights Watch said. And most refugees have been able to enter at the Cairo airport without difficulty. But the two cases of refoulement raise concerns that, going forward, airport officials might use improper documents as grounds to deport to Syria, Human Rights Watch said.

Egypt is party to the 1951 Refugee Convention but has turned over responsibility for determining refugee status to UNHCR. Interior Ministry immigration officials have in the past ordered deportations that amount to refoulement, most notoriously in 2008 with the deportation of 1,200 Eritreans. But until the past two months Egypt had not attempted refoulement of Syrians.

“At a time of great conflict and tragedy in Syria, we call on Egypt and all countries not to return any residents of Syria, including Palestinians, to Syria,” Frelick said.