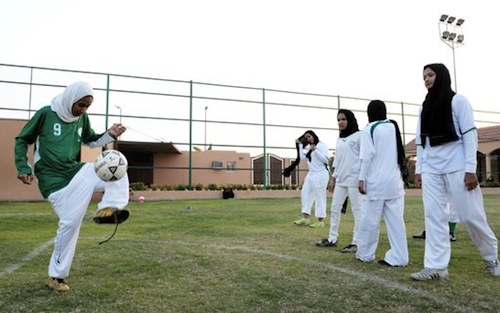 Saudi Arabia should allow all girls in the kingdom, including public school students, to play sports in school, Human Rights Watch said in a statement on Wednesday.

The official Saudi Press Agency announced on May 4, 2013, that female students enrolled in private girls’ schools could take part in sports so long as they wear “decent clothing” and are supervised by female Saudi instructors within the tight regulations of the country’s Education Ministry.

“All of Saudi Arabia’s women and girls should be able to enjoy the social, educational, and health benefits of taking part in sports,” said Minky Worden, director of global initiatives at Human Rights Watch. “If the government can take down this barrier for private schools, it should give girls and women in publicly funded schools the same benefit.”

Although two women competed for Saudi Arabia at the Olympics in 2012 for the first time, women and girls are still not free to practice sports in the kingdom. The government should follow its announcement about private schools with a removal of public school barriers and an announcement of a strategy to make it happen, Human Rights Watch said.

Saudi Arabia is the only country in the world that still effectively bars girls from taking part in sport in government schools. There is no state sports infrastructure for women, with all designated buildings, sports clubs, courses, expert trainers, and referees limited to men. Discrimination against girls and women in sport still takes place at multiple levels in the kingdom.

The Saudi authorities should extend the health and educational benefits that the Education Ministry cited to girls in public schools as well as private schools, Human Rights Watch said.

The government has carried out encouraging recent modest reforms for women, Human Rights Watch said, including on combatting domestic violence and licensing a female lawyer trainee.

But as Human Rights Watch has documented in the report “Perpetual Minors,” the “guardianship” system and strict gender segregation limit women’s ability to take part in public life. Under this discriminatory system, girls and women are forbidden from traveling, conducting official business, or undergoing certain medical procedures without permission from their male guardians. All women remain banned from driving in Saudi Arabia.

Human Rights Watch has long urged the International Olympic Committee to use its leverage with Saudi Arabia to press its sports leaders to conform to the values and principles of the Olympic Movement by adopting policies that will benefit all Saudi women and girls. These include establishing a timeline and benchmarksfor introducing physical education as a subject for girls in public and private schools.

“The world cheered when Saudi women shared the Olympic spotlight, but millions of women and girls in Saudi Arabia are still stuck on the sidelines,” Worden said. ”This is a moment for the global sporting community to press Saudi Arabia to allow sports for women and girls, once and for all.”