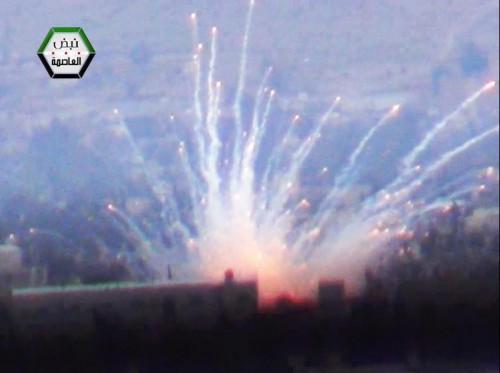 Syria’s state media on Sunday reported that Israeli missiles struck a military and scientific research center near the Syrian capital and caused casualties.

“The new Israeli attack is an attempt to raise the morale of the terrorist groups which have been reeling from strikes by our noble army,” Syrian television said referring to recent offensives by the forces of Bashar al-Assad against rebels.

“The new Israeli aggression shows the direct involvement of the Zionist entity,” it added.

The reports were later on confirmed by anonymous Israeli officials that the Israeli Air Force carried out a strike against a shipment of advanced missiles bound for Hezbollah.

U.S. President Barack Obama commenting on the incident said Israel has the right to guard against the transfer of advanced weapons to Hezbollah.

According to the Syrian Observatory for Human Rights, an opposition group, citizens in the Qudseyya suburb of Damascus reported seeing jets in the sky at the time of the explosions.

Video footage uploaded onto the Internet by activists showed a huge ball of fire rising into the night sky lighting up Damascus.

A Damascus resident described the blasts to Al Jazeera, saying they felt like “an earthquake” and “unprecedented”.

The attack, the second in three days, signaled a sharp escalation of Israel’s involvement in Syria’s bloody civil war.

Earlier, the site of Sunday’s explosion was the target of an Israeli strike on January 30 .