‘I want all the world to know about us’: opinion 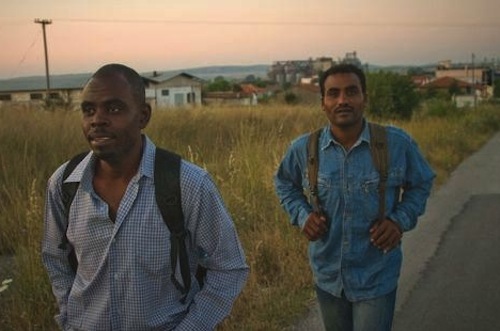 For many people flying to Greece means sunshine and leisure. Indeed the sun is shining today and the sea is blue and tempting. But for others, the same sea is dark and dangerous.

After arriving in Lesvos, an island right next to Turkey, the first thing we saw on the way from the airport were backpacks and clothes dispersed over a nearby beach. ‘’Irregular migrants landed here this morning,’’ said the taxi driver indifferently.

Last December, 27 people (mostly Afghans) trying to reach Greece drowned close to the shores of Lesvos, after the boat they were in capsized. Only a 16-year-old Afghan boy survived. Our thoughts go back to our visits the previous days to one of Athens’ many detention facilities and to the houses where people fleeing the Syrian conflict are living. Bahrir, Ralya and Alia arrived in Greece in similar circumstances, on some other night.

We met 10-year-old Ralya on the first day of our visit in Athens. She was walking barefoot on the cold floor of a derelict house that no one else would want to live in. Her family is paying 165 euros every month for rent. They fled Syria because of the conflict. She lives here with her father and siblings, while her mother is in Germany.

“The plastic boat that was carrying us across the river Evros sank and we got separated from my wife,” explained the father.

Brahim, one of his sons, is 15. He told us how he likes playing football and scores many goals for his team. Brahim came home bleeding one day. He had been attacked by a group of young men wearing black. One of them had been shouting “Beat him, beat him,” he remembers.

In the past few years, asylum-seekers and irregular migrants in Greece face a new threat – the dramatic increase in the number of racist attacks by members of extreme right-wing groups.

The day after, we were in a cold cell in the Petrou Ralli detention facility in Athens. We met Alia, a woman from an African country. She spoke out loud, not caring if the guards could hear her or not, ‘’ I want all the world to know about us’’ she said. She has applied for asylum and they told her that they will keep her detained for 12 months. ‘’I am going crazy’’ she continued, “I have done nothing wrong and yet I am punished’’.

Alia told us that she likes to write. The guards have given her paper but no pen. From time to time they can spend some time in the open air, but not every day, she said. She told us how one day, the women spontaneously started singing and dancing during their time outside, prompting the guards to shout at them and order them to stop immediately. ‘’I’m asking everyone who has humanity to help us.’’

Back on Lesvos, our taxi came to a sudden halt as we reach our destination, turning our thoughts back to the task at hand. We were there to speak with the people of the island and despite the grim situation we took heart from what they had to say.

Refugees and migrants landing on their island’s shores is part of their daily lives. Since last summer, many asylum-seekers and irregular migrants arriving in Lesvos have been held in poor conditions in police stations on the island – anyone not detained was left with no shelter. But people on the island stepped in to help. Among the initiatives was the establishment of a network to help new arrivals, called the “Village of all together”.

“Over the past year we have seen more and more people arriving,” some Lesvos residents told us. “Those people clearly were in need. Many of us got actively involved and helped them. Basically we did for them what we would do for anyone in need.”

This was only one of the many stories of solidarity we heard over the last few days. Many of these solidarity actions often go unreported, which is not to say unnoticed by those in need. Such actions by ordinary people, in Greece and elsewhere, should remind governments across Europe of their duty to uphold and respect the rights of migrants and refugees.