Posted on: August 4th, 2012 by AlYunaniya Staff No Comments 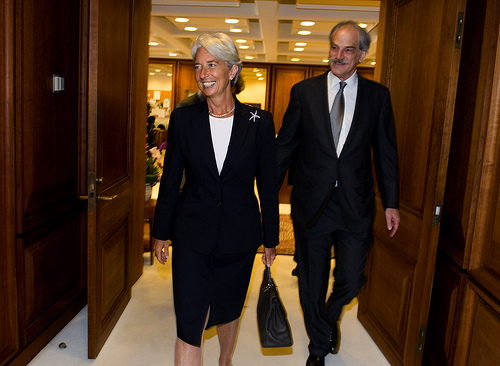 The International Monetary Fund (IMF) on Friday approved loans to Morocco and Jordan as turbulence continues to sweep the Middle East and North Africa and as Europe’s debt crisis threatens to intensify the region’s economic problems.

The IMF approved a $6.2 billion precautionary line of credit for Morocco over two years, which it said the government would treat as “insurance” in case economic conditions deteriorate and it faced sudden financing needs, according to Reuters.

“The Moroccan authorities have stated that they… do not intend to draw on the line, unless Morocco experiences actual balance of payments needs from a deterioration of external conditions,” the IMF said in a statement.

The IMF board also approved a $2 billion loan to Jordan, announced last month.

Jordan faced a series of exogenous shocks, beginning in 2011. Repeated damage of the Arab Gas Pipeline prompted an increase in imports of expensive fuel products for electricity generation. At the same time, regional tensions adversely affected tourism, remittances, and foreign direct investment. As a result, the current account deficit widened and growth slowed. The social impact of these shocks was contained because the authorities accommodated it by increasing subsidies and wages, financed by grants.

”Jordan is facing external and fiscal challenges stemming largely from exogenous shocks to its energy sector. These shocks have put pressure on the external accounts and increased the deficits of the central government and the public electricity company.

Separately, Morocco has been struggling with drought and the sovereign debt crisis in the eurozone, which is Morocco’s biggest trade partner.

IMF Managing Director Christine Lagarde said Morocco’s economic policies have contributed to strong growth, low inflation and a resilient banking sector. But the country has been hard hit by a decline in trade from the euro zone.  “High oil prices have contributed to a build-up of fiscal and external pressures. “The authorities have already taken action to address these vulnerabilities, and are committed to maintaining sound policies,”   Legarde said.

Jordan is the first Arab country to formally request assistance from the IMF since the Arab Spring.