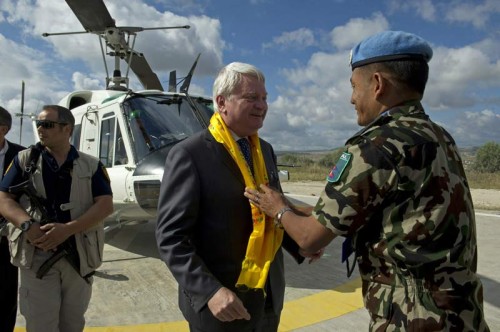 The United Nations peacekeeping chief yesterday lauded the efforts of UN “blue helmets” in maintaining peace along the so-called Blue Line separating Israel and Lebanon, adding that the work of the UN Interim Force in Lebanon (UNFIL) was crucial in building confidence in the region.

“I am encouraged to see that the situation along the Blue Line is generally calm,” the Under-Secretary-General for Peacekeeping Operations, Hervé Ladsous, said today following an aerial tour which included visits to the Wazzani and Shebaa areas, El Adeisseh, Kafr Kela and Sheikh Abbad’s Tomb and meetings with UNIFIL troops from Indonesia, Italy, Nepal, Spain, France, and India.

In his remarks, Mr. Ladsous commended Israel and Lebanon for their continued commitment to the cessation of hostilities and the implementation of Security Council resolution 1701, which ended the 2006 war between Israel and the Lebanese group Hizbollah, and calls for respect for the Blue Line, the disarming of all militias in Lebanon, and an end to arms smuggling in the area.

Accompanied by UNIFIL Force Commander, Paolo Serra, the Under-Secretary-General also received a briefing on the ongoing visible marking of the Blue Line, which is undertaken by UNIFIL in coordination with both parties.

“A visible element of their good work with UNIFIL is the Blue Line marking process,” Mr. Ladsous noted, stating it was “a critical confidence-building measure.”

Established in 1978, UNIFIL is tasked with ensuring that the area between the so-called Blue Line – separating Israel and Lebanon – and the Litani River is free of unauthorized weapons, personnel and assets. It also cooperates with the Lebanese Armed Forces (LAF) so they can fulfil their security responsibilities.

Mr. Ladsous praised the cooperation between UNIFIL and the LAF in maintaining a relatively tranquil security environment in an area of the world under increasing strain – most notably, due to the continuing conflict in nearby Syria which has fuelled sectarian tensions across Lebanon and raised concerns that the country could plunge back into the internecine violence it endured during its 15 year civil war, which ended in 1990.

The last weeks of August 2012, for instance, witnessed fighting between supporters and opponents of the Syrian Government in Beirut, while tensions also increased in other parts of the country, such as the northern city of Tripoli. Moreover, a series of kidnappings also contributed to escalation in tensions.

Nevertheless, the UN official singled out the positive work undertaken by the two forces.

“I saw on the ground today the positive outcome of the strategic partnership between UNIFIL and the LAF,” Mr. Ladsous continued.

“I have high admiration for all the military and civilian personnel of UNIFIL whose hard work and sacrifice have rendered southern Lebanon the security and stability it lacked for three decades until 2006,” he added.