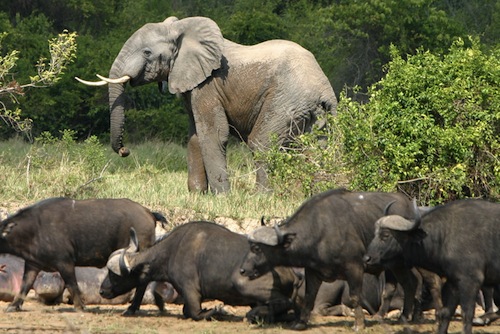 Some 2,000 representatives from 150 governments, indigenous groups, businesses and civil society gathered at a United Nations-backed conference in Bangkok, Thailand, which aims to find ways to stop wildlife poaching and illegal trading.

At the conference of the Convention on International Trade in Endangered Species of Wild Fauna and Flora (CITES), delegates will examine some 70 proposals to amend the current wildlife trade system, which has been in place for 40 years.

“CITES is known for taking meaningful decisions that have an impact ‘on-the-ground,’” said the Secretary-General of the Convention, John E.Scanlon, adding that 2013 “will be of great significance to the future of many species of plants and animals.”

With 176 Member States, CITES is one of the world’s most powerful tools for biodiversity conservation, regulating international trade in close to 35,000 species of plants and animals, including their products and derivatives, ensuring their survival in the wild with benefits for the livelihoods of local people and the global environment.

Throughout the conference, which ends on 14 March, governments will consider 70 proposals submitted by 55 countries from across the world seek to improve the conservation and sustainable use of marine species – including several shark species – the vicuña population of Ecuador, polar bears, African elephants, white rhinos, freshwater turtles, frogs, crocodiles, ornamental and medicinal plants and many other species.

Delegates will also discuss how CITES can further enhance efforts to combat the illegal trade in elephant ivory and rhino horn; the potential impacts of the Convention’s measures on the livelihoods of the rural poor, who are often on the frontlines of using and managing wildlife; and whether the Convention should request the Global Environment Facility (GEF) to serve as its financial mechanism for CITES, among other measures.

“As over-exploitation of the world’s critical natural resource base puts countries on an unsustainable path, ever more pressure is being exerted on species,” said the Executive Director of the UN Environment Programme (UNEP), Achim Steiner.

“Yet CITES, alongside many other international agreements, provides a wealth of examples where countries are seizing opportunities to pursue much more resource-efficient development pathways,” he added.