Iraq imposes ban on Al Jazeera and 9 other channels 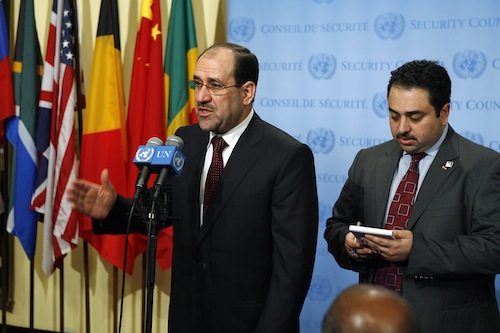 Iraq has imposed a ban on 10 satellite television channels, including Qatar- based Al Jazeera accusing it for escalating sectarian tension.

“We took a decision to suspend the licence of some satellite channels that adopted language encouraging violence and sectarianism,”  Mujahid Abu al-Hail of the Communications and Media Commission told AFP on Sunday.

Al Jazeera has not been formally notified of the ban it said.

The move comes after a wave of violence that began on Tuesday with clashes between security forces and Sunni Arab protesters in northern Iraq that has killed a total of more than 170 people.

The violence is the deadliest so far linked to demonstrations that broke out in Sunni areas of the Shia-majority country.

The protesters have called for the resignation of Prime Minister Nuri al-Maliki for allegedly targeting their community.

Prime Minister Nuri al-Maliki called for peace in a speech on Iraqi TV on Saturday.

In his speech, he said sectarian conflict had returned to Iraq “because it began in another place in this region” – a clear reference to Syria.

The protesters have called for the resignation of Prime Minister Nuri al-Maliki, a Shiite, and railed against authorities for allegedly targeting their community.

U.N. special representative to Iraq Martin Kobler, who has condemned the 5-day violence in Northern Iraq, said Thursday that civilian and government leaders must work together to calm Iraq’s society.