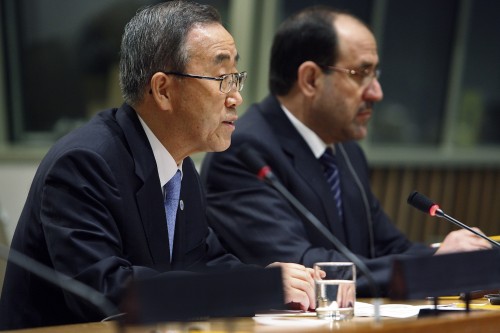 A preliminary parliamentary committee report based in part on witness interviews and given to Human Rights Watch claims top Iraqi officials ordered a raid on a demonstrators’ camp on April 23,  in Haweeja.

During the operation, scores of protesters and some soldiers died. The report by HRW provides evidence that Prime Minister Nuri al-Maliki, the defense minister, and senior defense and interior ministry officials may have ordered the raid, although it does not address what orders they issued concerning the use of force.

It does claim though that the defense minister and senior defense and interior ministry officials did not respond to warnings of excessive use of force by the security forces. The committee gave Human Rights Watch the preliminary findings of its investigation.

Members of a separate ministerial committee named by Maliki to investigate the episode told Human Rights Watch that they seriously doubt they will be able to complete their work. The ministerial committee is inadequately resourced, stymied by lack of cooperation from security forces, and unlikely to lead to prosecutions or publish its conclusions, committee members told Human Rights Watch.

“The people of Iraq aren’t going to be fooled by a Potemkin inquiry into the killings at Haweeja,” said Sarah Leah Whitson, Middle East director at Human Rights Watch.

“As the country teeters on the brink of further violence, the government is wasting a critical opportunity to restore confidence in its ability to achieve justice for the civilians and security forces who died on April 23.”

The ministerial committee has so far failed to interview any witnesses to or participants in the raid on the demonstration, raising serious doubts as to the government’s intent to hold instigators of the attack responsible, Human Rights Watch said.

The Iraqi government should immediately provide the ministerial committee with the financial and political support necessary to investigate the apparently unlawful use of lethal force by the security forces, including senior-level officials, Human Rights Watch said. Armed men killed at least one security official after security forces raided the demonstration.

According to both committees and media reports, on April 23, army soldiers, federal police, and SWAT forces fired on a crowd of about 1,000 demonstrators in Haweeja. The Defense Ministry said that 23 people were security forces from using violent means to stop future protests.

Despite numerous instances in the past five months in which security forces allegedly used excessive force at protests, killing scores of demonstrators, Iraqi authorities have not undertaken any full and comprehensive public inquiry into attacks on protesters, or investigated senior officers for abuses of authority, including potentially ordering attacks on civilians, HRWE said.

A politicized and inadequate investigation is not going to get to the truth of what happened,” Whitson said. “The ongoing protests and escalating violence that have followed the Haweeja killings are evidence that many people regard the ministerial investigative committee as a mere diversion rather than as a credible step toward accountability.”