Iraq’s PM in Iran for a two-day visit 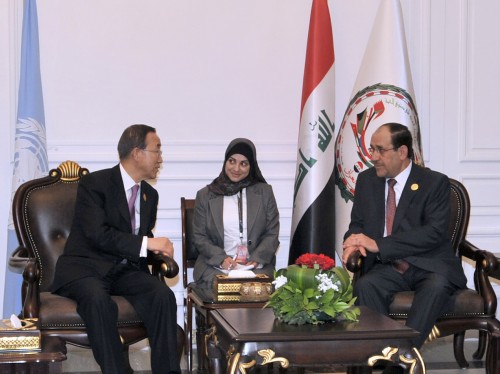 Al-Maliki arrived in Tehran on Sunday and was welcomed by Iran’s Energy Minister Majid Namjou.

The focus of talks was on bilateral, regional and international issues, and to “develop and strengthen bilateral ties,” IRNA reported.

Talks during Maliki’s visit are also expected to concentrate on economic and regional issues like the crisis in Syria.

It is the Iraqi premier’s first visit to Iran in nearly two years, and comes as Iraq is preparing to host Iranian officials and the P5+1 group of world powers(Britain, China, France, Russia and the US plus Germany) on May 23, for the next round of talks on Tehran’s controversial nuclear weapons program.

Iran and the P5+1 wrapped up the first round of talks in Istanbul, Turkey on April 14. Both sides characterized the talks as “constructive” and “positive.”

Meanwhile, Iraqi Foreign Minister Hoshiyar Zebari has also met with an EU delegation to talk about issues relevant to the upcoming meeting between Iran and the P5+1, according to a statement by Iraq’s Foreign Minister.