Israel and Hamas agree to Gaza ceasefire; Israel will not lift blockade 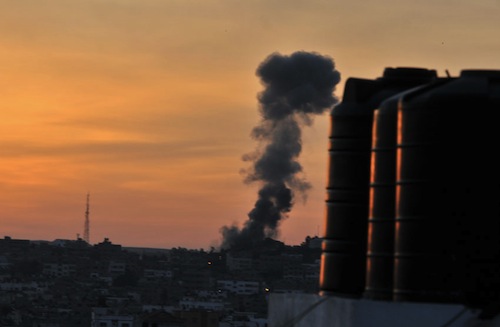 A ceasefire has gone into effect in Gaza after Israel and Hamas agreed to cease hostilities putting an end to the worst fighting between the two Middle Eastern foes in almost four years.

The ceasefire fire was announced hours earlier before it took hold, after a meeting between Egyptian President Mohamed Mursi and U.S. Secretary of State Hillary Clinton.

“The United States welcomes the agreement today for a ceasefire. In the days ahead, the United States will work with partners in the region to consolidate this progress,” Clinton said. She indicated that the deal came at “a critical moment for the region.”

Egyptian Foreign Minister Mohamed Kamel Amr appeared with Clinton to announce that a cease-fire would begin at 19:00 GMT on Wednesday.

Mohamed Kamel Amr thanked all parties involved in brokering the truce as he made the announcement in a joint news conference with US Secretary of State Hillary Clinton in the Egyptian capital, Cairo.

“Egypt appreciates the role of the Arab League, the valuable contributions of Turkey and Qatar, and those of the Secretary General of the United Nations to support the efforts of the Government of Egypt to end the violence. At the same time, Egypt calls upon the international community to be engaged in monitoring the implementation of the Egyptian-brokered agreement and to ensure all parties adhere to these agreements,” Amr said.

“A short while ago, a ceasefire agreement regarding the fighting in the south, came into effect. Following eight days of operations, the IDF has accomplished its pre-determined objectives for Operation Pillar of Defense, and has inflicted severe damage to Hamas and its military capabilities,” a press release by IDF said.

According to a copy of the agreement obtained by The Associated Press, Israel and all Palestinian militant groups agreed to halt “all hostilities.” This means Israel has to end airstrikes and assassinations of wanted militants, while Palestinians have to halt rocket fire from inside Gaza.

After a 24 hour period, the agreement calls for “opening the crossings and facilitating the movement of people and transfer of goods, and refraining from restricting residents’ free movement,” according to AP.

However according to Israeli sources even though Israel has agreed to a truce, it will not lift its blockade of the Palestinian territory, which is run by the Islamist Hamas movement.

After the ceasefire appeared to take hold, Palestinians took to the streets to celebrate what they called a victory over Israel.