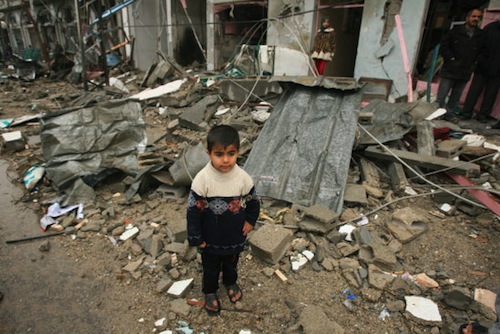 A United Nations committee voiced concern at a wide range of practices that violate Israel’s obligations as an occupying Power and infringe on the human rights of the Palestinians, and warned that popular discontent could result in another round of violence.

The Israeli detention of an estimated 5,000 Palestinians, the “systematically abusive” detention of Palestinian children, the impact of the ongoing Israeli blockade of Gaza and the continued demolition of Palestinian homes were among the concerns cited by the UN Special Committee to investigate Israeli practices affecting the human rights of the Palestinian people and other Arabs of the occupied territories, as it concluded its latest fact-finding visit to Amman and Cairo.Witnesses reported that some 200 children are in Israeli detention at any given time, and that children are often taken away in the middle of the night, blindfolded and their hands tied.

“Israel’s continued detention of an estimated 5,000 Palestinians should be of deep concern to the world,” said Ambassador Palitha Kohona of Sri Lanka, who currently heads the Committee. He noted in particular 20 prisoners who are on hunger strikes to protest abuses such as arbitrary detention, poor prison conditions, denial of family visits, solitary confinement, lack of access to education and negligent medical treatment.

“The most alarming testimony,” said Mr. Kohona, “concerned the systematically abusive detention and interrogation by Israeli authorities of Palestinian children.” Witnesses reported that some 200 children are in Israeli detention at any given time, and that children are often taken away in the middle of the night, blindfolded and their hands tied.

“Witnesses stated that Palestinian children are denied requests to be accompanied by a parent, denied access to a lawyer, and put at serious risk of torture and ill-treatment at the hands of Israeli security officials,” Mr. Kohona said in a news release.

Turning to Gaza, he said the lives of Palestinians in the territory have been “profoundly disrupted” by the six-year-old Israeli blockade. In particular, the committee was informed about the impact of Israel reducing the area in which Palestinian fishermen in Gaza can fish during the prime fishing season.

“Gaza’s 4,000 fishermen used to catch four tons of fish each year, now they bring in only 1.5 tons,” the committee said, adding that today, 80 per cent of Palestinian fishermen live in poverty.

“Gaza’s farmers find themselves in similar circumstances,” the committee observed. “They aren’t maximizing the cultivation of their traditional crops of strawberries, carnations, herbs and sweet peppers due to Israel’s near-total restriction on exports and enforcement of a buffer zone inside of Gaza.”

The blockade also had the effect of “bifurcating Palestinian society,” since many Palestinians in Gaza have not seen family members in the West Bank for years, owing to Israeli restrictions on movement between Gaza and the rest of Palestine, he noted.

The committee also heard “disturbing” testimony about the treatment of Palestinians who seek a permit to leave Gaza, including efforts by Israeli officials to pressure them into becoming informants and forcing women to undergo humiliating strip searches.

It was also briefed on continuing settlement construction in the West Bank, including East Jerusalem, the widespread phenomenon of Israeli settler violence and Israel’s discriminatory planning and zoning regime that effectively prohibits Palestinians from building or even renovating their homes.

In the first five months of 2013, 42 Palestinian structures were demolished in East Jerusalem. One witness reminded the committee that not all demolitions are reported as some families are forced to demolish their own homes to avoid huge fees from the Israeli Government.

“Businesses have a responsibility to not be complicit in Israel’s policies and practices that openly violate Palestinian rights,” observed the committee, which listened to reports of businesses, including multinational corporations, which are profiting from the Israeli settlement enterprise.

“It is inconceivable that any business could not be aware of the illegal nature of Israel’s settlement activities in the West Bank, including East Jerusalem,” said Mr. Kohona. “There is a need for scrupulous due diligence and a clear awareness of the potential legal and reputational consequences for businesses associated with the Israeli settlement enterprise.”

The three-member committee, established by the General Assembly in 1968, will present a full report on its mission and other activities to the Assembly in November 2013.