Israeli violations of Palestinian media freedoms on the rise 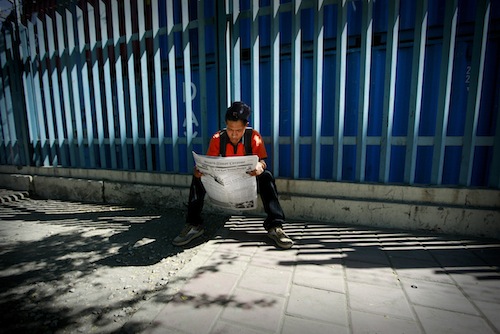 At a press conference held by the Palestinian Center for Development and Media Freedoms (MADA) which reviewed the findings of the annual report on violations against media freedoms in Palestine during 2012, members of MADA discussed the nature of the violations documented throughout the year.

The conference was held at MADA’s headquarter in Ramallah on the morning of 27 March 2013.

Opening remarks were delivered by the Chairman of the Board of Directors, Dr. Ghazi Hanania, who noted that the past year witnessed a serious escalation in violations against journalists by the Israeli forces, who, he says, had no qualms with killing three journalists deliberately during Israel’s latest offensive against the Gaza Strip.

Hanania added, “The Israeli authorities were not even bothered to justify their murders which conveys to what extent Israel’s disregard for laws and international conventions has reached. Not only that, but its disregard for the lives of Palestinian journalists, whereby not only their freedom to express themselves has been violated but also the most important human right, the right to live.”

MADA’s annual report for 2012 explains that the status of media freedom in Palestine has had no promising signs of improvement since the start of the year. As journalists began the year with violations and attacks on their rights, they said their farewell to 2012 with the loss of three colleagues: Aqsa TV cameraman Mahmoud Alkoumi, 30-years-old, Aqsa TV photographer Hussam Salameh, also 30-years-old, and Executive Director of the Jerusalem Educational Radio Muhamed Moussa Abu Eisha, 24-years-old.

Rimawi explained that the increase in the number and type of violations committed is due to several factors, most notably the power of the Palestinian image and word, and the key role that the Palestinian press plays in shaping the world’s public opinion and reporting on violations committed against them by the occupation. Another factor is that the occupation has never been held accountable or punished for its crimes against journalists and media freedoms, which therefore encourages members of the occupational forces to commit more violations without consideration to human rights and international laws and conventions that guarantee freedom of expression and protection for journalists.

The annual report contains important details about the number of media freedom violations, the types of violations, the dangers associated with them, and the cities most vulnerable to them.

The press conference began with a minute of silence in tribute to the martyrs of the press in Palestine and around the world.