Israelis and Palestinians should resume direct talks without delay – MEPs 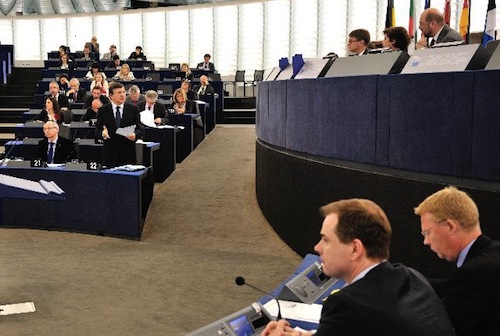 Ending the conflict between Israelis and Palestinians would further not only their own vital interests, but those of the wider region and the EU too, said MEPs on Thursday. In a resolution calling on both parties to resume talks on a two-state solution without delay, they also call on the Israeli Government to stop all construction and extension of settlements in the West Bank and East Jerusalem, which the EU views as illegal.

MEPs welcome the exchange of letters between the two parties initiated on 17 April 2012 and the joint statement by Israel and the Palestinian Authority of 12 May 2012, in which they state their commitment to achieving peace. However, MEPs also voice grave concerns about developments in Area C of the West Bank and in East Jerusalem.

The resolution was passed with 291 votes in favour; 274 against and 39 abstentions.

The resolution calls on Israel to meet its obligations under international humanitarian law by securing an immediate end to house demolitions, evictions and forced displacement of Palestinians, facilitating their free movement, ensuring fair distribution of water to meet their needs and improving their access to social services, in particular education and public health, in Area C and in East Jerusalem. The Palestinian authorities are also encouraged to do more to improve living conditions in the two areas.

MEPs urge that EU-Israeli bilateral agreements be properly enforced, so as to ensure that goods from Israel’s illegal West Bank settlements are not exported to the EU under the preferential terms of the EU-Israel Association agreement. They also call on the European External Action Service and the European Commission to investigate allegations of damage done to EU-funded structures in the occupied territories and report back to Parliament.

Parliament reiterates that only a peaceful and non-violent solution to the Israeli-Palestinian conflict can be sustainable and that it should not affect the dignity of either side. The EU will not recognize any changes to the pre-1967 borders, including with regard to Jerusalem, unless they are agreed by the parties themselves, MEPs underline.

They also urge the EU and its member states to play a more active political role in achieving a just and lasting peace between Israelis and Palestinians and voice support for EU foreign policy chief Catherine Ashton’s efforts to create credible prospects for re-launching the peace process.