Posted on: October 22nd, 2012 by Romana Turina No Comments 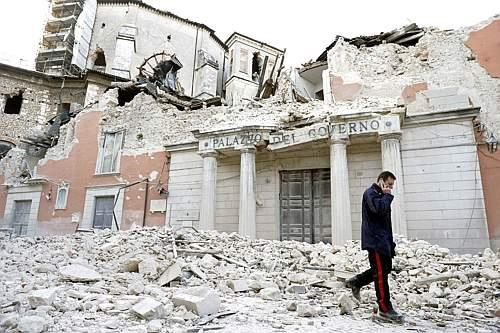 2009 quake left the city of Aquila in central Italy in rubble. Historic buildings crumbled in the 6.3 magnitude quake, 309 died, and thousands were left homeless.

Today, a team of Italian scientists have been found guilty of manslaughter for failing to warn citizens of the massive earthquake about to happen. The judicial decision has infuriated the global scientific community.

The seven accused had been part of the region’s Major Risks Committee which had met on March 31 2009, six days before the earthquake. They issued a statement designed to reassure residents after studying tremors in the area, which stressed it was impossible to say when another event may occur.

In court, prosecutor Fabio Picuti said they had given “an incomplete, inept, unsuitable and criminally mistaken analysis.”

Immediately after the quake charges were brought against six government scientists, and an official, for not sufficiently warning people of the risks of another seismic event. The case has been closed only today.

Defence lawyers said the buildings in Aquila were “medieval”, therefore not safe, or strong. He stated that earthquakes cannot be predicted, and quoted some statements from the  5,000 letters sent by scientists from around the world to the Italian Government.

The only hope the scientists have now is to remain free from jail until an appeals process is completed. Legal experts are feverishly working on the case; however, the Italian Government seems to be adamant in making an example of these men.