Posted on: May 24th, 2013 by AlYunaniya Staff No Comments 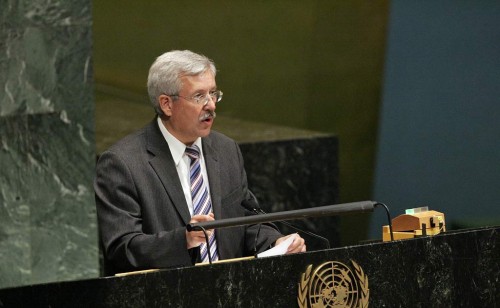 Japan will host the world conference slated to be held next year at which countries will adopt the successor to the current global blueprint for disaster risk reduction efforts, it was announced today at a United Nation forum on the issue that wrapped up in Geneva.

The 10-year Hyogo Framework for Action (HFA) came out of the world conference held in Kobe, Hyogo, Japan, in 2005. It is the first plan to explain, describe and detail the work that is required from all different sectors and actors to reduce disaster losses.

The HFA outlines five priorities for action, and offers guiding principles and practical means for achieving disaster resilience. Its goal is to substantially reduce disaster losses by 2015 by building the resilience of nations and communities to disasters.

Delegates at this week’s 4th Global Platform for Disaster Risk Reduction called for immediately starting work on developing targets and indicators to monitor the reduction of risk, ahead of next year’s conference, to be held in the Japanese city of Sendai.

Martin Dahinden, Director-General of the Swiss Agency for Development and Cooperation and Chair of the Global Platform, said the three-day meeting confirmed that the process to develop a successor to the Hyogo Framework is well underway.

“There is consensus that the new instrument should build on the HFA and introduce the necessary innovations to address the challenges of increasing risk over the next 20 to 30 years,” he stated.

“We need to enable local action, address climate risk and recognize the central roles of both the scientific community and the private sector, which were both very present at this Global Platform.”

In addition to the scientific community and the private sector, the record 3,500 participants at the Global Platform also including representatives of government, academia and non-governmental organizations (NGOs), among others.

Organized by the UN Office for Disaster Risk Reduction (UNISDR), the Global Platform was established in 2007 as a biennial forum for information exchange, discussion of latest development and knowledge and partnership-building across sectors, with the goal to improve implementation of disaster risk reduction through better communication and coordination amongst stakeholders.

Also today, UNISDR released the most detailed account yet of the implementation of the Hyogo Framework. It finds that, since 2005, 121 countries have enacted legislation to establish policy and legal frameworks for disaster risk reduction.

While noting that almost 90 per cent of countries report the integration of disaster risk reduction in some form within public investment and planning decisions, the report finds that a key challenge is finding the resources to ensure that frameworks and principles become operational.

“Since the HFA was introduced there has been a significant change in mindset. We are seeing lots more planning, legislation and new policies. There are 56 national disaster loss data bases and their numbers are growing all the time. Nearly every country in the world now has a HFA focal point,” said UNISDR Director Elizabeth Longworth.

“There is evidence that the HFA is making a difference, even if a lot more needs to be done to address the gap between policy and implementation and arrest the continuous rise in economic losses from disasters,” she added.

Among the events at this week’s forum was the launch of a new interactive tool for accessing disaster data. With the touch of a finger, users of “GAR for Tangible Earth” can access real-time weather data or check historical disaster patterns. It uses earth science data from the 2013 Global Assessment Report on Disaster Risk Reduction, released earlier this month by UNISDR.

Tablet computer users can download the application for free from iTunes. Among other functions, they can request hourly weather updates or query the probability of seismic events for a given region. They can also make correlations between such phenomena as continental drift, El Niño, global warming and the growth of megacities.