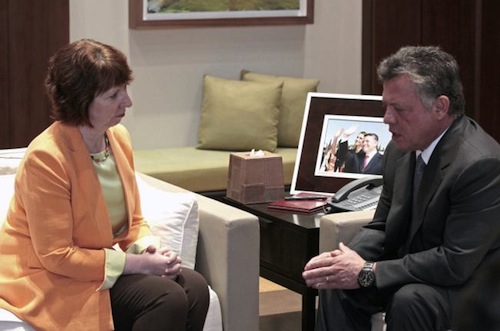 While attention during US President Barack Obama’s visit to Jordan on March 22, 2013, focused on the large number of Syrian refugees that Jordan has welcomed and accommodated since the start of the Syrian crisis in March 2011, its rejection of these categories of asylum seekers fleeing the violence should not be ignored, Human Rights Watch and the Harvard Clinic said. Obama should seek assurances from King Abdullah II that Jordan will not reject any asylum seekers at its border with Syria. The risks to their lives in Syria are too serious to send anyone back at the present time.

“King Abdullah’s support for 350,000 Syrian refugees deserves President Obama’s praise, but Obama should not give Jordan a free pass to force Palestinian refugees and asylum seekers back to Syria,” said Bill Frelick, Refugee Program director at Human Rights Watch. “Jordan should recognize that everyone – and that includes Palestinian refugees, single men, and undocumented people – has the right not to be forcibly sent back to Syria to face the risk of death or serious harm.”

In two separate trips to Jordan and Lebanon, in January and February, Human Rights Watch and the Harvard Clinic conducted in-depth interviews with more than 120 Syrian and Palestinian refugees from Syria. Human Rights Watch and the Harvard Clinic documented that, as a matter of policy, Jordan is turning back people from Syria at its border without adequately considering the risk to them. Such a policy violates the international law principle of nonrefoulement, which forbids governments from returning refugees and asylum seekers to places where their lives or freedom would be threatened.

The total number of asylum seekers rejected at the border since the fighting began in Syria is not known. But many of the Syrian and Palestinian refugees Human Rights Watch and the Harvard Clinic interviewed in Jordan said that they saw Palestinians, single men, and undocumented people from their groups being refused entry at the border or forcibly returned after initial screening at a police center in Mafraq determined that they belonged in one of these groups.

Witnesses said that border guards explicitly warn members of these groups that they are not allowed to enter Jordan, sometimes forcing them to return directly to places in Syria where violent clashes are occurring without any consideration for the risk they face. One Syrian man married to a Palestinian woman recounted what a Jordanian Border Patrol officer told him at the border on December 16, 2012:

“You can come, but she is not allowed because she’s Palestinian.” I told them our house is burned down and that we have no house to go back to. The Border Patrol officer said, “That is not our problem.” I begged him. My wife and children were begging and crying not to be sent back. He said, “It is impossible,” and put us in a military vehicle and took us to the border.

Prime Minister Abdullah Ensour has publicly announced Jordan’s policy to reject Palestinian refugees from Syria. In October, he told Al-Hayat, “Jordan has made a clear and explicit sovereign decision not to allow the crossing to Jordan by our Palestinian brothers who hold Syrian documents.”

Mahmoud Murjan and his wife and children were forcibly returned from Cyber City, a detention facility in Jordan, to Syria on September 25. Murjan was arrested at his home in Syria 20 days after he was forcibly returned, and his body was later dumped on the street in front of his father’s house, showing bullet wounds and signs of torture.

In this detention facility all refugee movements are restricted. However, the Jordanian authorities are much more flexible toward Syrian refugees and often grant humanitarian “bailout,” whereas Palestinian refugees are only rarely granted such leave.

“The detention of Palestinians in Cyber City, as well as discriminating against Palestinians and single males as ineligible to seek asylum within Jordan, violates Jordan’s international legal obligations,” said Meera Shah, clinical advocacy fellow at the Harvard Clinic. “Jordan should treat individuals in these categories the same as all other asylum seekers fleeing the fighting in Syria.”

Prior to the conflict in Syria, an estimated 500,000 Palestinian refugees lived there. Like the rest of the Syrian population, Palestinians have suffered from the violence. Palestinians interviewed by Human Rights Watch and the Harvard Clinic reported fleeing their homes in Syria because of aerial bombardment or the destruction of their homes by shelling and bombing. Others were personally targeted by the Syrian government, and had been arrested and mistreated or tortured.