Korean crisis has ‘gone too far’ as it plans to restart reactor, Ban warns 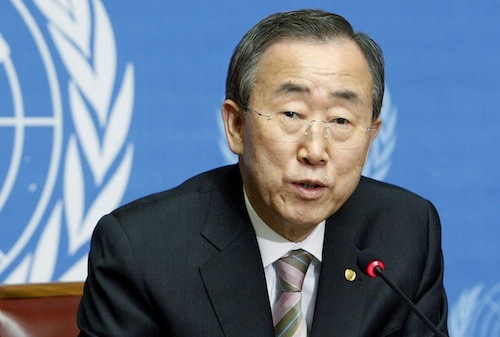 Secretary-General Ban Ki-moon today stressed the current crisis on the Korean peninsula “has already gone too far,” following an announcement by the Democratic People’s Republic of Korea (DPRK) to restart its Yongbyon nuclear reactor.

“I am deeply troubled. As Secretary-General, it is my duty to prevent war and to pursue peace. It is also my responsibility to state that the current crisis has already gone too far,” Mr. Ban said at a news conference during his visit to Andorra.

“Nuclear threats are not a game. Aggressive rhetoric and military posturing only result in counter-actions, and fuel fear and instability.”

Nuclear threats are not a game. Aggressive rhetoric and military posturing only result in counter-actions, and fuel fear and instability.

Mr. Ban called for dialogue and negotiations, underlining that this is “the only way to resolve the crisis,” and expressed his readiness to help all the parties involved to this end.

In February, the DPRK conducted its third, long threatened nuclear test, a move that was in violation of Security Council sanctions and drew widespread condemnation, including from Mr. Ban.

“Things must begin to calm down, as this situation, made worse by the lack of communication, could lead down a path that nobody should want to follow,” he said.

“There is no need for the Democratic People’s Republic of Korea to be on a collision course with the international community. I am convinced that nobody intends to attack DPRK because of disagreements about its political system or foreign policy. However, I am afraid that others will respond firmly to any direct military provocation.”