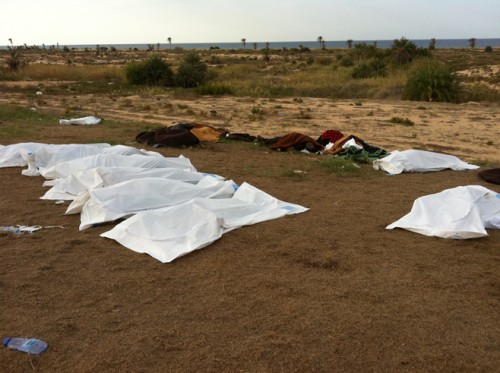 Libya should ensure that two Libyans with ties to the previous government of Muammar Gaddafi who were extradited from Egypt on March 26, 2013, are treated humanely and granted their full due process rights, Human Rights said in a statement on Saturday.

Egypt and other countries asked to extradite people to Libya should only arrest and hand over suspects if Libya credibly guarantees that it has ended the risk of torture or ill-treatment in detention, Human Rights Watch said. Before sending a detainee to Libya, the Egyptian and other authorities responsible need to be satisfied that the person’s fundamental rights will not be violated, such as through arbitrary detention or a blatantly unfair trial.

“Holding former Gaddafi officials and others to account for past crimes is an important step for Libyans to achieve justice,” said Nadim Houry, deputy Middle East and North Africa director at Human Rights Watch. “But given the current level of abuse of detainees in Libya, no one facing trial should be sent back there unless the government can prove that they won’t be abused or denied a fair trial.”

Libya should provide credible guarantees that the detainees’ rights will be protected, including providing the detainees with a prompt judicial review and promptly informing them of any criminal charges against them. Anyone who is to be extradited should be given the opportunity to challenge their extradition beforehand if they fear torture, cruel and inhuman treatment, persecution based on their identity or beliefs, or other violations of human rights upon their return, Human Rights Watch said.

El Dam, a relative of Gaddafi who played a key role in Libyan relations with Egypt, is awaiting his extradition to Libya in Tora prison in Cairo. There is no official information on the status of his transfer to Libya, and his lawyer has challenged the pending extradition claiming he has Egyptian citizenship, although the office of international cooperation of the Egyptian public prosecution office has disputed that claim.

Many Libyans who worked officially or unofficially for the previous government fled Libya in mid-2011 after Gaddafi fell, most of them to Egypt and Tunisia. According to a New York Times report, the new Libyan government in 2012 gave the Egyptians a list with 40 people they wanted arrested. Libya recently gave Egypt a list with another 88 wanted people.

According to the same news report, Libya was preparing to deposit $2 billion in the Egyptian central bank, raising concerns about a possible “quid pro quo” deal between the two countries to hand over dozens of former Gaddafi loyalists who had found refuge in Egypt.

A report in the Egypt Independent mentions more Libyan support for Egypt in the form of 1 million barrels of crude oil, to be refined in Egypt.