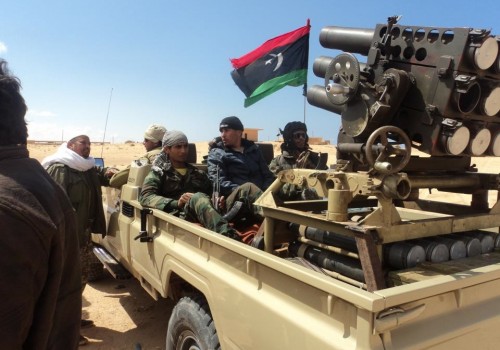 The abduction of ‘Anoud al-Senussi, the daughter of military intelligence chief under al-Gaddafi, Abdallah al-Senussi, upon her release from prison in Tripoli raises serious concerns about her safety and the Libyan authorities’ ability to protect detainees held since the 2011 armed conflict, Amnesty International said.

Anoud al-Senussi was abducted by unknown assailants at approximately 5:00 pm on 2 September outside Al-Baraka prison, formerly known as al-Ruwaimi prison, as the judicial police escorted her to Tripoli International Airport. Upon her release – which the authorities had been delaying since 8 August out of fears for her security – she had planned to meet relatives before flying out to Sabha in southern Libya.

“Anoud’s abduction casts a shadow on the Libyan authorities’ ability to ensure the safety of so many detainees held in relation to the 2011 armed conflict. They must now show that they have the political will and ability to tackle abuses by the militias and establish the rule of law, or the Libyan justice system will remain dysfunctional,” said Hassiba Hadj Sahraoui, Deputy Middle East and North Africa Programme Director at Amnesty International.

“How can the Libyan authorities claim that they are able to deliver fair trials, and apply the law in the most prominent, politically sensitive cases, when they are manifestly unable to ensure the basic safety of detainees?”

Upon Anoud’s release from Al-Baraka prison on Monday afternoon, the three-car judicial police convoy was ambushed by a group of masked men armed with heavy weapons. They allegedly shot in the air before abducting Anoud and driving off to an unknown location.

According to the Ministry of Justice, no one was injured in the attack. So far, the motives of the abduction and the identity of the perpetrators remain unknown.   Speaking at a press conference yesterday, the Minister of Justice, Salah al-Marghani, announced that investigations were under way and appealed to all Libyans, including the “revolutionaries”, for help in finding Anoud al-Senussi.

“The Libyan authorities’ top priority must be to ensure that Anoud al-Senussi is freed unharmed without delay. They must carry out an independent and impartial investigation into her abduction and bring the perpetrators to justice,” said Hassiba Hadj Sahraoui.

“This latest abduction and the ongoing lawlessness in the country if anything demonstrate the inability of the Libyan authorities to fairly try politically sensitive cases such as Abdallah al-Senussi and Saif al-Islam al-Gaddafi and underscores the need to hand them over to the International Criminal Court.”

Due to the sensitivity of Anoud al-Senussi’s case, the authorities had been preparing her release procedures for several weeks, before the operation eventually went ahead yesterday afternoon. A previous release attempt was aborted on 26 August after a riot erupted in al-Baraka prison, where several hundreds detainees are held on charges related to the 2011 conflict.

The detainees protested against delays in referrals to the prosecution, and the judicial authorities’ inability to implement release orders.

‘Anoud Abdallah al-Senussi, aged 21, was arrested in October 2012 following her arrival in Tripoli from Algeria, and sentenced to 10 months in prison on charges of using a forged passport and entering Libya on a forged document.

She was intending to visit her father Abdallah al-Senussi, held in detention in Tripoli since 5 September 2012 despite an International Criminal Court (ICC) warrant for his arrest. The office of the General Prosecutor recently announced that national proceedings against Abdallah al-Senussi and Saif al-Islam al-Gaddafi will begin on 19 September, in a move that defies the ICC and sets the authorities on course to conduct flawed trials that can result in the death penalty.

The judicial police was significantly weakened by the 2011 armed conflict. Hundreds of officers failed to report back to work, and the Ministry of Justice was forced to integrate some 10,000 former members of armed brigades that fought against al-Gaddafi, who lack the necessary training and experience to handle detainees. More resources need to be allocated to ensure the safety of detainees.

It is believed there are some 8,000 conflict-related detainees in Libya. Since the conflict, scores of detainees have been abducted by armed militias. In some cases, they have been tortured and summarily killed. These abductions are usually carried during transfers to courts or after release from prison – either as revenge for ordinary crimes or for acts allegedly committed on behalf of the former regime, or in some cases, for ransom. In some cases detainees have been abducted directly from prison.