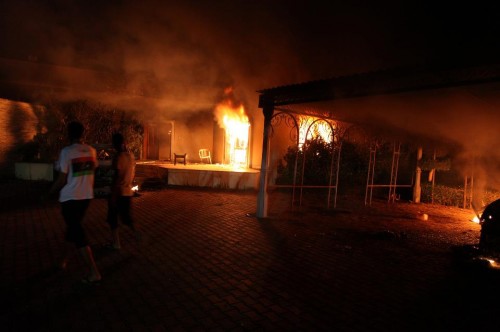 Libyan authorities have made four arrests concerning the attack on the US consulate in Benghazi in which the US ambassador and three embassy staff were killed while protests against the anti-Islam film have spread across the Middle East.

Four men are in custody and we are interrogating them because they are suspected of helping instigate the events at the US consulate,” Wanis Sharif Deputy Interior Minister told the Reuters news agency on Thursday.

Meanwhile, demonstrations against an anti-Islam film made in the US have spread to several countries across the Middle East.

Hundreds of protesters stormed the U.S. Embassy compound in the capital Sanaa, chanting “death to America”  removing the embassy’s sign on the outer wall. Clashes between police and demonstrators near the US embassy in Sanaa on Thursday killed 4 people and wounded another 34, a security official said, according to Al Jazeera.

At the same time, protesters clashed with police near the U.S. Embassy in Cairo for the third day in a row. Police used tear gas to disperse the demonstrators. Sixteen protesters and 13 policemen were wounded in the clashes, which broke out overnight. Twelve protesters have been arrested, the Interior Ministry said. American flags were also burned in Tunisia, outside the US embassy in the capital of Tunisia.

US President Barack Obama has called the leaders of Egypt and Libya to discuss security co-operation following the violence in Cairo and Benghazi, the White House has said. Barack Obama, the US president, has vowed to bring to justice those responsible for the Benghazi attack. Secretary of State Hillary Clinton said Washington had nothing to do with the video.

Innocence of Muslims, the film that mocked Prophet Mohammad, was produced in the US by a filmmaker with ties to Coptic Christian groups, and excerpted on YouTube with dubbing in Arabic.