Posted on: June 4th, 2012 by Romana Turina No Comments 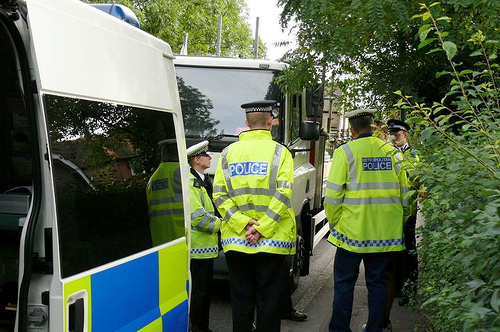 Under the rain, they were trying to pass their simple message: “This is your country!”, “It is your future!”, “Your democracy! Your choice!”. Hundreds were the anti-monarchist demonstrators who were prevented from reaching the banks of the Thames by security staff. The royal jubilee flotilla had to sail unperturbed.

The planned protest went ahead inside a designated protesters’ zone, discretely hidden away and impossible to be seen from the riverbank; but those excluded from it resisted, and protested on the other side of the fence, among merrymakers heading towards Tower Bridge.

The protesters held placards calling for “citizen not subject”, and “democracy not monarchy”, as they tried to exercise their freedom of speech. They were faced with boos and jeers from royalists, who started to sing ‘God Save the Queen.’

At the head of the protesters was Graham Smith, chief executive of Republic, a figure whose job is to make people notice how the royals spend most of their lives shielded from criticism, and supported by an imposed sense of entitlement. It seems that this protest might force them to face the strength of republican sentiment in Britain, and remind them of the democratic values their country has fought for in the past.

The case for a republic in Great Britain is mature. People wish to evolve, to live in a country in which aspiration, responsibility and democracy give a choice to every citizen; and to abandon a society whose institutions are based on inheritance and exclusive privilege.

A wind of change blows in Britain, and it finds support from the delegation of the Swedish Republican Movement that was present among the protesters in London. It is not an isolated event. Since its establishment in 2010, the Alliance of European Republican Movements (AERM) is grouping and organizing republican movements from many countries. Of the twelve monarchies still standing in Europe, AERM has members in seven of these, including the U.K.

Republic, in the person of Graham Smith, campaigns for an elected head of state to replace the monarchy in the United Kingdom. It has also called for a new constitution that puts real power in the hands of voters.

What would the Queen’s answer be? The Queen is the head of state, but the Prime Minister and Government run the country; does this mean that the royals will be able to pull it off as usual, and there is nothing new under the British sky?

The fact is that as censorship continues to keep the anti-monarchist protest away from public attention, the royal family has been battling its way into the new century with several clever moves. On the 9th April 2005, Prince of Wales was allowed to marry Mrs Parker Bowles with a civil ceremony at the Guildhall, Windsor. This cast a new light on the royal family, and helped it to stabilize an impression of ‘opening’ towards the people, of its embrace of democratic beliefs.

Through time, His Royal Highness Prince Charles developed ‘The Prince’s Charities’, a group of not-for-profit organisations to which he is Patron or President. The group is the largest multi-cause charitable enterprise in the United Kingdom, raising over £100million annually, and the organisations are active across a broad range of areas including education, environmental sustainability, and responsible business.

Is the British royal family on the course of a campaign to revamp their look, and assure their future power in the country? It would seem so, also because revenue created directly and indirectly by the royals for the country is brought to the fore more and more often.

As Giuseppe Tomasi di Lampedusa wrote in the Il Gattopardo (The Leopard, 1956): “If we want things to stay as they are, things will have to change.” A sentence uttered by the protagonist, Prince Fabrizio Salina, a nobleman caught in the midst of democracy, war, and revolution. It might be just what the day after the Queen’s diamond jubilee will bring about.

In the meantime, the anti-monarchists organise themselves. Bloggers discuss the events that took place in London, and the people continue to think about it. It seems the anti-monarchist demonstrators make sense to many citizens. And as they mention how children should believe they can achieve anything they want, provided they work hard for it; and claim people in the U.K. should be encouraged to take responsibility for their own political affairs, I wonder on the country’s future.

Can a society which suggests that even the wisest and most talented commoner is no match for even the most unpleasant and immoral royal continue to be?

We will be watching you mighty Britain; let your people decide what they want for a country.