Measles deaths in decline, but outbreaks in some regions jeopardizing progress 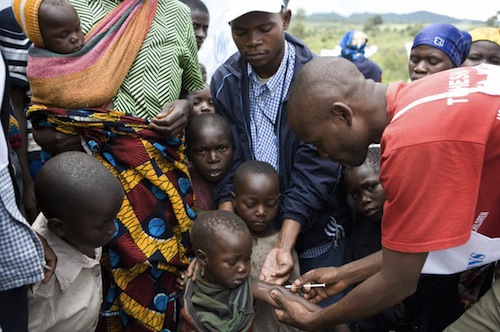 While the number of measles deaths around the world has significantly decreased over the past decade, large outbreaks in certain regions are jeopardizing progress, the United Nations health agency said today, adding that improved vaccination rates are critical to eliminate the disease.

Between 2000 and 2011, measles deaths dropped from 542,000 to 158,000 globally, representing a 71 per cent decrease. New cases also dropped during the same period by 58 per cent, according to new data released by the UN World Health Organization (WHO).

However, the agency warned that despite global progress, some populations remain unprotected, with an estimated 20 million children lacking vaccinations. More than half of them are concentrated in five countries: the Democratic Republic of the Congo (DRC), Ethiopia, India, Nigeria and Pakistan. India has the largest number of unvaccinated children – 6.7 million – followed by Nigeria and Ethiopia with 1.7 million and 1 million, respectively.

In 2011, outbreaks of the disease were reported in all five countries, as well as France, Italy and Spain. Most of these countries are in WHO regions which have committed to eliminate measles by 2015 or 2020.

Measles is a highly infectious disease that occurs through the spread of nasal and oral fluids and causes complications and deaths, even in previously healthy individuals. It is one of the leading causes of death among young children even though a safe vaccine is available.

“The measles outbreaks pose a serious challenge to the regional elimination efforts and signal where national health systems and routine immunization programmes need strengthening,” WHO stated in a news release. “Resuming progress in reducing measles cases and deaths means strengthening health systems so that they can provide effective immunization services and laboratory-supported surveillance for vaccine-preventable diseases to all children.”

The new data, published in WHO’s Weekly Epidemiological Record, shows overall progress in reducing deaths is linked largely to increased vaccination coverage. Two doses of measles vaccine are recommended by WHO since about 15 per cent of vaccinated children fail to develop immunity from the first dose.

The UN health agency noted that the outbreaks indicate the need to ensure that parents are fully aware of the benefits of immunization and the risks associated with not vaccinating children.

Since 2000, with support from the Measles & Rubella Initiative, more than one billion children have been reached through mass vaccination campaigns ? about 225 million of them in 2011.

Launched in 2001, the Measles & Rubella Initiative is a partnership — led by the American Red Cross, the UN Foundation, the US Centers for Disease Control and Prevention, the UN Children’s Fund (UNICEF) and WHO — committed to reducing measles deaths worldwide.

In April, the partners of the Initiative introduced a new global plan to jointly tackle measles and rubella using the same strategy and a combined vaccine. The new Measles & Rubella Initiative aims to reduce measles deaths worldwide by 95 per cent between by 2015 and to eliminate measles and rubella in at least five of six WHO regions by 2020.