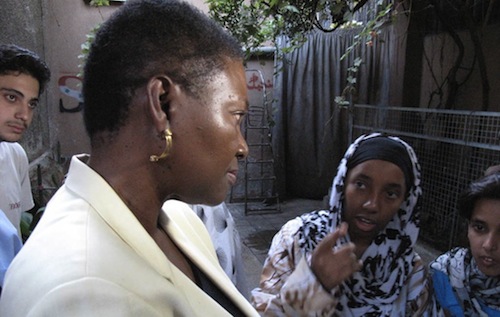 Some 2.5 million people face destitution in Syria as fighting grows ever more intense in populated areas, the United Nations top relief official said today, calling on the Government and donors to facilitate more aid through non-governmental organizations (NGOs) on the ground.

“There is more we could be doing right now in areas that are safe enough and where we have established solid partnerships with NGOs and the Syrian Arab Red Crescent,” said the Under-Secretary-General for Humanitarian Affairs and Emergency Relief Coordinator, Valerie Amos, as she neared the end of a three-day visit to the strife-torn country and Lebanon to see for herself the impact of the intensifying conflict and to discuss ways to increase humanitarian assistance.

Amos said the displaced families she met on her visits to Damascus and An Nabk are tired and anxious, without prospects of going home any time soon. Having faced traumatic experiences, they are now living in public buildings and in schools, with growing needs for health care, shelter, food water and sanitation.

“The UN and its partners are reaching more people with emergency aid every month, but we are only meeting some of the needs,” Amos said, voicing particular concern that the school year is due to start in September while schools are being used as shelters for the displaced.

“There is no reason why the ordinary Syrians – men women and children – should not receive as much help as is practically possible,” Amos said. “I continue to lobby the Government to be more flexible in its approach to humanitarian operations.”

Syria has been wracked by violence, with an estimated 17,000 people, mostly civilians, killed since the uprising against President Bashar al-Assad began some 17 months ago. Over the past fortnight, there have been reports of an escalation in violence in many towns and villages, as well as the country’s two biggest cities, Damascus and Aleppo.

“The violence has become more intense and is too often indiscriminate,” Amos said. “All parties must do more to protect civilians.”

Amos reported that over a million people have been uprooted and face destitution, and that perhaps a million more have urgent humanitarian needs due to the widening impact of the crisis on the economy and people’s livelihoods.

She recalled that after her previous visit in March, the UN Office for the Coordination of Humanitarian Affairs (OCHA), which she heads, estimated that a million people were in need of help.

“Now as many as 2.5 million are in need of assistance and we are working to update our plans and funding requirements,” she said, noting that insecurity and restrictions were only part of the problem. “Funding too is holding us back.”