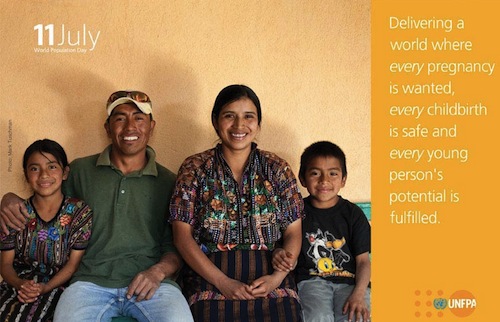 Marking World Population Day, Secretary-General Ban Ki-moon has called for more to be done to help those who most need access to reproductive health care. “I call for urgent concerted action by Member States to bridge the gap between demand and supply for reproductive health care,” Ban said in a message to mark the Day, which falls on 11 July.

Observed annually on 11 July since 1989, World Population Day focuses attention on the importance of population issues in the context of development plans and programmes, and the need to find solutions for these issues.

“The world’s population has more than tripled since the United Nations was created in 1945, and keeps growing,” Mr. Ban noted. “With more than seven billion people now inhabiting the planet, we face ever greater demands on shared resources and significant challenges to the achievement of internationally agreed development goals.”

The theme for this year’s Day is ‘Universal Access to Reproductive Health Services,’ aimed at highlighting the essential part that reproductive health plays in creating a just and equitable world.

“Working for the survival and the well-being of women and girls is a human right imperative. And in order to take advantage of women’s full potential in the development of their nations, they must be able to plan their lives and families,” the Executive Director of the UN Population Fund (UNFPA), Babatunde Osotimehin, said in his message for the Day. “This is why the international community is determined to making universal access to reproductive health a priority.”

According to UNFPA, reproductive health problems remain the leading cause of ill health and death for women of childbearing age worldwide. Some 222 million women who would like to avoid or delay pregnancy lack access to effective family planning, while nearly 800 women die every day in the process of giving life.

In addition, he said that about 1.8 billion young people are entering their reproductive years, often without the knowledge, skills and services they need to protect themselves – and their needs and human rights must be urgently addressed.

“We also have to address the special needs of young people – particularly adolescent girls. Today, pregnancy and childbirth-related complications are the major cause of death among girls 10 to 19 years old in most developing countries, while the highest rates of sexually transmitted infections are among young people aged 15 to 24,” the UNFPA chief said.

He added that family planning is a basic human right, but “it remains meaningless unless individuals and couples have access to contraceptives, information and services to enable them to exercise that right.”