Mursi: ‘Now is the time for change; Assad should take lessons from history’ 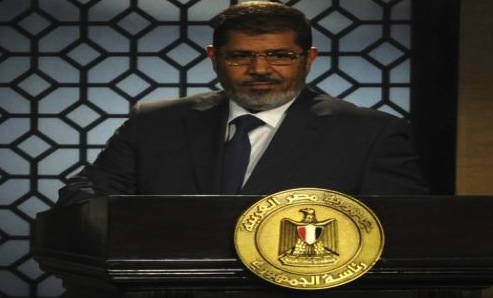 Mohammed Mursi, Egypt’s president, referring to the crisis in Syria said that “Now is the time for change,” warning President Bashar al-Assad’s regime to “take lessons from recent history.”

“This time has passed now. Now it is time for change,” Mursi said , during his first presidential address to the league, on Wednesday in the capital Cairo.  ”No time to be wasted talking about reform,” he added.

Mursi reiterated his call for Bashar al-Assad to step down warning him to take lessons from history in reference to Arab Spring uprsings that overthrew dictators of Tunisia, Egypt and Libya.

“I tell the Syrian regime ‘there is still a chance to end the bloodshed’,” Mursi told Arab foreign ministers. ”Don’t take the right step at the wrong time… because that would be the wrong step,” he added.

Mursi’s remarks follow his speech at the Non-Aligned Movement (NAM) summit in the capital of Iran, Tehran, where he called it an “ethical duty” to support the Syrian people against the “oppressive regime” in Damascus.

Mursi’s comments come as the Observatory for Human Rights, an opposition group claims the conflict in Syria has left 26,000 people dead since it erupted more than 17 months ago.

Meanwhile, Syrian Information Minister Omran al-Zohbi on Monday said the Egyptian leader was complicit in the armed conflict rocking his country. ”He is responsible for spilling Syrian blood, as are the Qataris, the Saudis and the Turks,” Zohbi said.