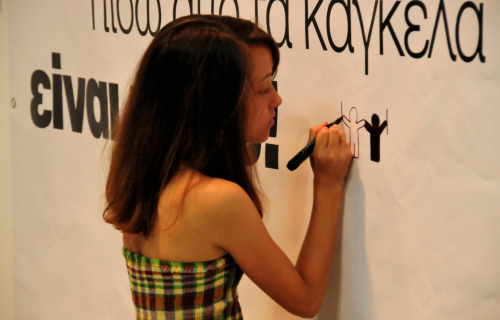 The Muslim Association of Greece (MAG), today expressed its criticism against the violence against immigrants in Greece and the “inability” of the government to set an immigration policy.

“We condemn every kind of racist violence, the daily attacks against humans, against their color or race. We have watched the election campaigns of the main parties attracting votes, promising to vanish the immigrants of the country, pointing them as the main reason of the crisis,” MAG stated in a press release.

“This practice, along with the entry of extreme right party Golden Dawn in the parliament, that guarantees extermination of every foreigner, legal or illegal, asylum to everyone who attacks foreigners (claiming nation-defense), has triggered a pogrom of escalating daily attacks. Suddenly Greece acquired a Racist Profile,” the association added.

The statement came after eight supporters of Golden dawn (Chrysi Avgi) party have attacked 4 Egyptians in Athens in the urban area of Kallithea on Thursday. The supporters of the Neo-Nazi party, who wore black clothes, attacked the Egyptians with batons and chains while 3 of the 4 Egyptians were seriously injured.

The party’s rise has been accompanied by an alarming number of attacks on migrants. A pilot scheme set up by nongovernmental organizations, including the UNHCR, recorded 63 racist attacks in central Athens alone over a three-month period.

‘The solution for the illegal immigration is not the physical extermination but the application of a proper policy that will deal the matter effectively and humanly,” MAG noted.

According to the ELIAMEP think tank, in 2011 the country was home to an estimated 1.1 million migrants, who make up almost 10 percent of the country’s population. About 400,000 are thought to be undocumented, a high number for a country as small as Greece.

MAG is a nonprofit association headquartered in Athens, Greece, where thousands of Muslims live. Since its establishment in 2003, MAG has worked to bring together all Muslims in Greece and has exerted efforts to promote a positive image of Islam and Muslims in Greece. Through media relations, relations with Greek authorities, education and advocacy for Muslims’ rights, MAG ensures that the Muslim voice is represented.