Posted on: September 22nd, 2012 by Julie Jalloul No Comments

‘Muslims in Greece condemn anti-Islamic film; no demonstrations in order not to create tensions in crisis-ridden Greece’ 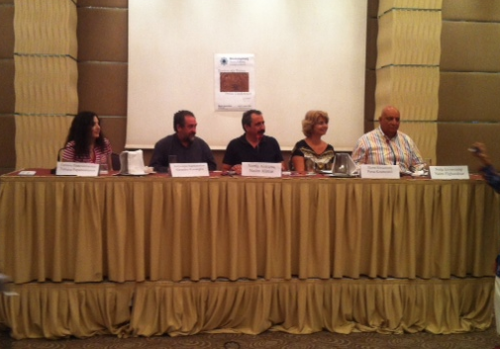 Naim El-Ghandour, the President of the Muslim Association of Greece, speaking at a press conference in Athens, condemned the provocative film “The Innocence of Muslims”, a film that sparked outrage around the Muslim world but also the extreme reactions on the part of the Muslims saying that such actions cannot characterize an entire faith.

“You can’t in the name of freedom of speech slander a faith of 1.8 billion people. We all have free speech and I respect that. It is something that we had been missing for decades in Muslim countries before the Arab Spring . Actually this movie was a test by the West for Muslims after the Arab spring.

Speaking to Alyunaniya, he said the  reason the Muslim Association of Greece hasn’t planned any demonstrations, is that “even though in a democracy we have every right to protest, we wanted to state our position in a civilized way, we don’t want to create tensions in a country that is also ours suffering from an economic crisis. We respect the hard times Greece is going through.”

It is worth noting that during the press conference eminent figures like known theologians and sociologists stated their positions while a message of the Secretary of the Ministry of Religious Education Giorgos Kalatzis was read.

In his message, Kalatzis stated that even though he was aware of the movie released he is not amongst the people who even bothered to watch it as it was simply an act of provocation aimed at dehumanizing a belief.”

He added, “Muslims and Christians in Greece have been living harmoniously together  in Greece and nobody had the right to insult their religion. We strongly condemn that.”

While the press conference was organized for the purpose of the anti-Islamic film in response to questions concerning problems Muslims in Greece face, Greek-Egyptian El-Ghandour said that Muslims in Greece feel as “second class citizens” then they have no places for worship and no place to bury their dead. “Greek Muslims have no other option but to use basement apartments, garages and warehouses for worshipping,” he said.

As for the phenomenon of the increasing racist attacks, he said that it’s not only the Muslims being attacked but also the Christians from Egypt.”

In a comment already stated a few months ago on Alyunaniya, El-Ghandour called the Greek PM a racist who said should be especially sensitive to the issue since he comes from a family of Greek migrants who once lived in Egypt.

Prime Minister Antonis Samaras has adopted a tough line against illegal immigration during his pre-electoral campaign referring to migrants as “the conquerors of Greek society”.

The Greek Parliament has approved a controversial plan to build a taxpayer-funded mosque in Athens, the only capital in the European Union without a state-funded mosque. The plan which has been stalled calls for renovating an existing state building  on a disused navy base in the industrial district of Votanikos near the center of Athens.