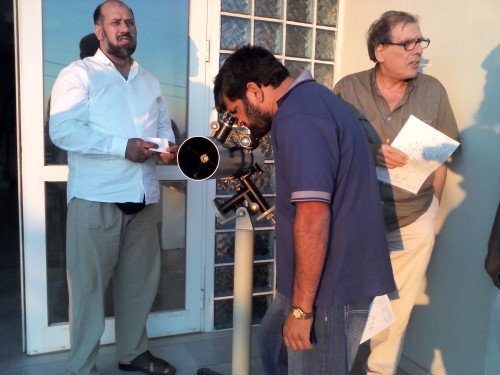 Delegates from all Muslim communities in Greece gathered on Thursday at the Athens Observatory to mark the beginning of Ramadan, the holiest month in Islam when Muslims abstain from eating food or drinking water from sunrise to sunset.

All Muslim Communities of Greece are beginning Ramadan on Friday July 20, as identifying the start of Ramadan is like a waiting game where Islamic scholars must see the new crescent moon in the night skies before the holy month officially begins.

“All delegations from Muslim communities gathered to look in the telescope with their own eyes the birth of the new moon, and have the chance to know more about this natural phenomenon with the assistance of Dr. Dapergolas who honors us every year and gives us the chance to calculate Ramadan based on the astronomical data of Greece and not from abroad. We wish all Muslims a blessed Ramadan and may God accept their good deeds and prayers,” he added.

This year, Ramadan in Greece occurs during one of the hottest stretches of the year, and a time of a great amount of sunlight. As a result, the fasting period each day is sa couple hours longer than it would be in the winter.

“It is the Islamic month where muslims don’t only refrain from eating and drinking during daylight hours but also an opportunity for inward-looking, purification of the soul and  body, and promoting assistance to the poor,” Lina, Syrian living in Greece says.

Egyptian Rabab Hassan says, “I am looking forward for Ramadan in Greece. During this holy month we volunteer to bring meals each evening to break the daily fast at the mosque next to where I live in Keratsini. Ramadan in Greece is a time to bring all communities closer. Muslims Greeks, Egyptians, Syrians, everybody.”

Ramadan is the month in which the first verses of the Qur’an were revealed to the Islamic prophet, Muhammad.

Mahmoud Abou Hamed says,  ”We here as Muslims in Greece, we have a lot to be thankful for. We are prosperous and we can’t help but look at Muslims and non-Muslims who are suffering,” he said. “We pray for the peace and prosperity for everybody. This is what we pray for at this time.”