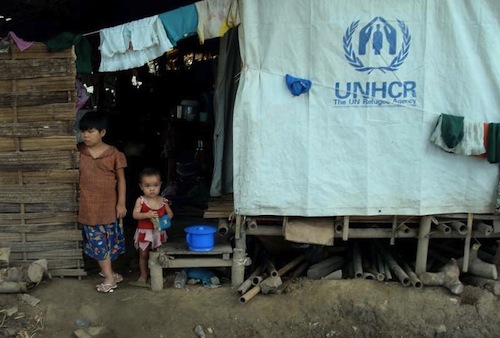 Heavy monsoon rains and a tropical cyclone threaten the lives of tens of thousands of displaced persons in western Myanmar unless the authorities immediately step up efforts to protect them, Amnesty International said.

More than 140,000 individuals – mostly from the Rohingya Muslim minority – are currently displaced across Rakhine state and have been living in temporary shelters since violence erupted between the Buddhist and Muslim communities in Rakhine state in June 2012. Around half are located in low-lying areas prone to flooding.

According to information released by the US military, cyclone “Mahasen” is expected to reach the area by late Wednesday or early Thursday morning.

“The government has been repeatedly warned to make appropriate arrangements for those displaced in Rakhine state. Now thousands of lives are at stake unless targeted action is taken immediately to assist those most at risk,” said Isabelle Arradon, Amnesty International’s Deputy Asia Pacific Director.

Authorities in Myanmar are said to have taken some measures, including identifying evacuation sites and broadcasting announcements in and around the coastal town of Sittwe to warn residents of the impending storm.

However, several of the identified evacuation sites are within already established camps for internally displaced persons or fail to have adequate storm-ready structures, and storm warnings have not been provided to all at-risk displaced communities outside of Rakhine state’s capital city, Sittwe.

The authorities also continue to impose restrictions on freedom of movement for Rohingya in Rakhine state, including those who are confined to ill-equipped camps.

“The government must facilitate assistance without discrimination, including by lifting any restrictions on movement and ensuring humanitarian groups have access to all individuals in need. The freedom for Rohingya to seek higher ground may be their only chance to avoid potential flooding from heavy rains,” said Arradon.

The Rohingya have faced discrimination for decades in Myanmar. They are not recognized as an official ethnic group and continue to be denied equal access to citizenship rights. Their rights to study, work, travel, marry, practise their religion, and receive health services are restricted to various degrees.

Since the violence last June, Buddhist and Muslim communities have been living largely segregated from each other and tensions remain high.

“Considering continuing tensions between Buddhist and Muslim communities in Rakhine, the authorities need to prepare for the possibility of violence during an evacuation situation or in the aftermath of a storm. Addressing the discrimination of the Rohingya community and taking urgent steps towards accountability for last year’s violence will be crucial to prevent future abuses,” said Arradon.