Posted on: October 28th, 2012 by AlYunaniya Staff No Comments 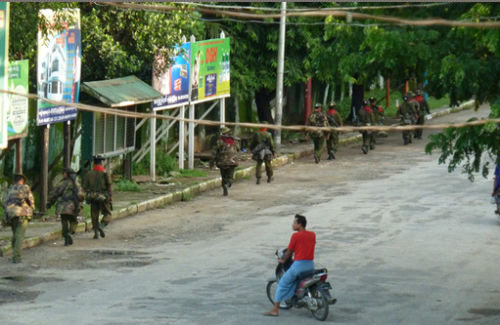 The government of Myanmar should take immediate steps to stop sectarian violence against the Rohingya Muslim population in Arakan State, in western Myanmar, and ensure protection and aid to both Rohingyas and Arakanese in the state, Human Rights Watch said on Saturday.

According to media reports, Government officials have said that at least 56 people have been killed and hundreds of homes torched since Sunday in the north of Rakhine state, located in western Myanmar.

Tensions between the Buddhist majority and the stateless Muslim Rohingya minority have been rife since deadly violence began in June. Tens of thousands people were living in camps around Sittwe, the state capital of Rakhine state, already before the latest flare-up. The total number of displaced is now estimated to be around 100,000, according to Al Jazeera.

On Thursday, Secretary-General Ban Ki-moon urged the authorities in Myanmar to take action to bring an end to the lawlessness currently affecting the state, with the UN chief’s spokesperson describing the most recent outbreak of communal violence in five townships in the state’s north as “deeply troubling.”

New satellite imagery obtained by Human Rights Watch shows extensive destruction of homes and other property in a predominantly Rohingya Muslim area of the coastal town of Kyauk Pyu – one of several areas of new violence and displacement.

Human Rights Watch fears the death toll is far higher than what government officials have said based on allegations from witnesses fleeing scenes of carnage and the government’s well-documented history of underestimating figures that might lead to criticism of the state.

In June, Human Rights Watch documented killings, rape, and mass arrests by security forces against Rohingya Muslims after the security forces failed to protect both them and Arakan Buddhists during deadly sectarian violence. Since then, government restrictions on humanitarian access to the Rohingya community left many of the displaced.

Myanmar’s government denies citizenship to most Rohingya and the protections that come with it. Since communal violence between Rohingya and Arakanese erupted in June, many Rohingya have been compelled to live in squalid camps in Arakan State, where they have been denied access to adequate humanitarian aid and vulnerable to attack from Arakan militants.

President Thein Sein appointed an investigative commission earlier in 2012 to determine the causes of violence, but has yet to propose any policies to address those causes. He has at times called for the segregation of the Rohingya and even their expulsion from Myanmar, which feeds popular animosity against the Rohingya from the general population.