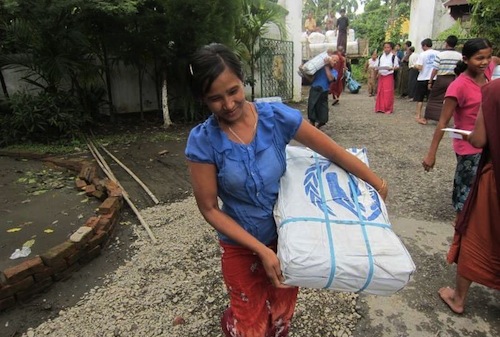 Four months after inter-communal violence erupted in Myanmar’s Rakhine state, the number of internally displaced persons (IDPs) continues to rise, the United Nations refugee agency said, adding that some 75,000 people are currently living in camps and many more are in need of humanitarian assistance.

“Movement is still restricted in parts of Rakhine state, preventing some villagers from going to work, accessing markets, food supplies, health services and education,” a spokesperson for the Office of the UN High Commissioner for Refugees (UNHCR), Adrian Edwards, told reporters in Geneva. “Out of desperation, people are leaving villages to seek food and medical assistance at the IDP camps.”

In June, violence between ethnic Rakhine Buddhists and Rohingya Muslims in the state of Rakhine, located in western Myanmar, led to the country’s Government declaring a state of emergency there.

The figure of 75,000 people in need of humanitarian aid, provided by local authorities, is an increase on initial Government estimates of some 50,000 people displaced shortly after the unrest broke out in early June, according to UNHCR. It added that a resurgence of violence in early August resulted in more than 4,000 people having their homes burned down, affecting thousands more.

The refugee agency, along with its humanitarian partners, has been advocating for greater humanitarian access and support for the most affected villages, including the towns of Sittwe, Kyauk Taw and Maungdaw.

“We hope that by delivering aid in places of origin, humanitarian agencies can help to prevent further displacement and make interventions that can facilitate the eventual return of IDPs,” Edwards said.

The agency is also supporting the construction of emergency temporary shelters that can house about 10,500 people, and continues to support delivery of basic assistance such as food, water and sanitation to Government-run IDP camps until the situation stabilizes sufficiently for them to return home.

Edwards added that despite the rising numbers of IDPs, some people whose houses were not damaged have returned to the town of Sittwe. He added that a “fragile calm” has returned, but the situation remains tense.