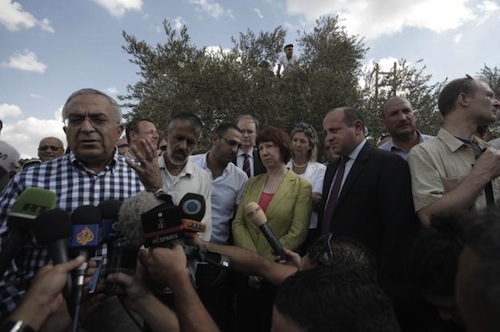 The Decision has two components. For the first, €60 million will be allocated to the PEGASE mechanism, which supports the Palestinian National Development Plan by helping the PA to finance its budget deficit and implement its reform agenda, meet its obligations towards civil employees, pensioners and most vulnerable citizens, and maintain the functioning of the administration and the provision of essential public services to the population. This amount will contribute to the Palestinian Authority’s payments of salaries and pensions for the first three months of 2013.

The Second component allocates an initial amount of €40 million to UNWRA’s 2013 regular budget (General Fund) in order to support the education, health, relief and social services programmes which UNWRA is responsible for providing for Palestine refugees in West Bank, Gaza, Jordan, Syria and Lebanon.

High Representative/Vice/President Catherine Ashton said: “The European Union is again doing its utmost to underpin the ability of the PA and UNRWA to deliver essential services to the Palestinian people without interruption. We are committed to continuing our support while urging other donors to follow suit. This year we are also earmarking a specific allocation for the Jerash refugee camp in Jordan, which is home to some of the most vulnerable Palestinian refugees in the Middle East.”

EU Commissioner for Enlargement and European Neighbourhood Policy Štefan Füle, announcing the adoption of the package, said: “The Palestinian Authority has particular problems in obtaining donor funds early in the year. The EU is aware of this and, as a reliable donor, has taken steps to alleviate the problem. These funds for both the PA and UNWRA for early 2013 are vital for ensuring that there is no interruption in the provision of the basic health and education services which the Palestinian people need”.

In addition to the two components financed from the 2013 budget, a further amount of €2 million is allocated from 2012 funds to rebuild shelters for around 100 of the poorest Palestinian refugee families in Jordan’s Jerash Refugee Camp.